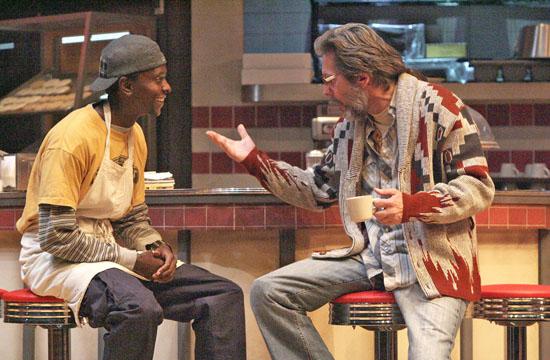 “Superior Donuts,” a superb script written by Tracy Letts, takes place in a family donut shop located in a run-down part of Chicago. The owner is the equally run-down Arthur Przybyszewski, brilliantly portrayed by Gary Cole who dresses like an aging hippie in old denim clothes and an out-of-date long ponytail. Cole captures all the nuances of his most complex character.

Arthur comes to work one morning only to discover that his shop has been vandalized and the word “pussy” has been spray painted on the wall. Being somewhat depressed because both his parents and ex-wife are deceased and his daughter doesn’t talk to him, Arthur’s reaction is almost a non-reaction as officers Randy Osteen and James Bailey, wonderfully played by Mary Beth Fisher and Damon Gupton, respectively, take down the report. Osteen has developed a crush on Arthur, who is totally oblivious to her feelings. What is amusing is Fisher’s macho physical life as the officer, which is counter to her feminine desires, while her partner Bailey likes to dress up as a “Star Trek” character, purportedly including pointed ears.

The next character we meet is Franco, played by the most talented Edi Gathegi, a tall, slender man who moves about the stage like a combination of basketball player, ballet, and break dancer. His physical life and boundless energy are fascinating, and it’s like watching someone with no bones in his body. Franco is applying for a job at the donut shop and the scene that takes place between he and Arthur is hilarious. Franco is concerned about the health aspects of the donuts and wants to know if Arthur believes in profit sharing to which Arthur replies: “I believe in profit sharing, I just don’t provide it.” Arthur asks Franco if he eats donuts and he says: “I don’t eat any nasty ass donuts.”

Arthur hires Franco who then launches into his business plan on how to grow the business by keeping the shop open later, offering Yoga classes, and running poetry readings, all of which Arthur turns thumbs down. It is revealed that Franco has written a novel entitled “America Will Be,” which Arthur reads and actually thinks is quite good.

At one point, Franco accuses Arthur of being a racist to which Arthur replies: “I don’t think I’m a racist, I hired you.” Franco counters with, “I can’t be a racist. I’m the oppressed.” Franco also comments on Arthur’s ponytail: “You know who looks good in a ponytail? Girls and ponies.”

Gathegi delivers Letts’ comic lines with crack precision and is thoroughly charming from beginning to end.

The next character we meet is Max, a Russian who owns a nearby electronics store. Well played by Ron Bottitta, Max wants to buy Arthur’s store so he can expand his operation and says, “I offer a personal touch and Croatian pornography.” Another interesting character is Lady Boyle, a down-and-out street person who comes into the shop everyday for her free donut and coffee. She has some very funny lines that are delivered with excellent comic timing.

The plot thickens as we discover that Franco is in deep debt to his bookie, Luther. Played with just the right amount of cynicism by Paul Dillon who pays a visit to the store with his scary “enforcer,” Kevin, portrayed by Matt McTighe. Luther threatens Franco and we know bad things could happen to the adorable Franco.

As the story unfolds, Franco tries to create the perfect healthy donut, and under Franco’s bubbly influence, Arthur begins to cheer up a bit and even encourages him to get his novel, seven years in the making, ready for publication. But, as we suspected, Luther rears his ugly head and Franco gets a large dose of his wrath. It’s at this point, that we see the broad range of Gathegi’s acting ability as his character gets a little dark. In an interesting plot twist, it’s fascinating and unexpected to see how Arthur reacts to Franco’s problem.

Perhaps the only directing flaw is in Arthur’s expository monologues that are sprinkled throughout the play. The stage lights go down and Arthur reveals some of the regrets of his past. The problem is Cole’s focus was not clear as to whom the character was talking. More direction was needed and perhaps breaking the fourth wall and talking directly to the audience instead of trying to find a focus point would have helped those scenes.

The technical elements of the play are perfect, beginning with the marvelous set by John Arnone who created the interior of the donut shop that sits underneath elevated train tracks. The sound of the train, coupled with lights, punctuates the end of Arthur’s monologues. The light design by Daniel Ionazzi, sound design by Richard Woodbury, and costume design by Laura Bauer all worked together to enhance this enchanting production. Special kudos to fight choreographer Ned Mochel who created one of the most spectacular fight scenes you’ll ever see on stage.

“Superior Donuts” is a delicious, non-sugary treat guaranteed to entertain you. Tracy Letts’ excellent, well-written script is laced with comedic, but unsuperficial dialogue that springs forth organically. Combined with Randall Arney’s mostly impeccable, precision direction, this is a thoroughly enjoyable evening of theatre.