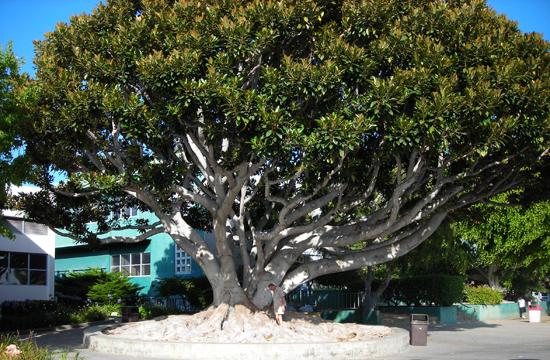 On June 4, the Santa Monica Main Library residents were given the opportunity to choose the appropriate species of trees to line all residential streets in the event a tree needs to be replaced in the near future.

The meeting was the second of three workshops hosted by the Urban Forest Master Plan Task Force, part of the “Street Tree Species Selections” process City officials hoped they would be able to plan for the long-term health of Santa Monica’s urban forest.

“When a tree dies in the city, we want to make sure that we have a plan going forward that communicates to the entire community what is going to go into that spot. It’s not just a willy-nilly process, it’s a really planned, open, public process,” Grace Phillips, a member of the Urban Forest Task Force and subcommittee for street tree selection said. She added it was vital the public was kept abreast of and involved with the City’s future plans.

“We have went through every street in the city, and made recommendations for what we think should be planted there for the next 50, 100 years.”

With the Air Quality Management District (AQMD) providing about $198,000 to plant 1,000 new native trees throughout the city, the city’s forester said the time has come for the city and its residents to put some serious thought into the trees that would line local streets for, potentially, the rest of the 21st century.

“We have an aging forest (but) no long-range plan in replacing trees. It’s a plan that’s for the future so that as trees naturally reach the end of their lifespan, we have the right tree designated as a replacement,” Walt Warriner, Santa Monica’s community forester said. “This workshop is about getting community input on the proposed street-tree designations that we have throughout the city. It’s a chance for residents to look at their individual neighborhoods and their streets and see what street trees we are proposing for them.”

He also added the proposed citywide arboretum would greatly complement the urban forest.

“The arboretum would support this plan hugely in that we’re proposing a lot of trees that are not necessarily widely available at the nurseries today,” Warriner said. “Either we’re going to get nurseries to grow these trees or having an arboretum kind of extenuates that and adds another level of sustainability to the city.”

Phillips added the June 4 community meeting was the second in a series of three workshops for public input, with residents also having the opportunity to take part in the process in an online survey.

Once public input is gathered, the results will be forwarded to the City’s planning commission, with the city council ultimately reviewing and adopting the final master plan. Once the council adopts a final version, it will be publicly published and will include guidelines for maintenance and tree trimming for each type of species.

While the council is still months away from considering the master plan, Council member Kevin McKeown said both he and his colleagues will make every effort to strike a balance between individual preference and community benefit.

“This is a very personal choice for a lot of people. It’s going to be difficult to come up with a citywide policy that makes everybody happy. Our job as a council will be to integrate personal desire with a community-wide plan that make for a healthy, diverse forest,” McKeown said. “I like the fact that we are diversifying the forest. We have to do that for the health of the urban forest in the long term.”

To McKeown’s point, the 30-plus residents who attended the workshop broke up into small discussion groups, with each bloc pouring over a map of Santa Monica filled with color-coded dots to signify the current trees and future street tree designations. An image of each species of tree was also on display alongside one of the walls inside the library’s multi-purpose room.

Former Santa Monica Mayor Judy Abdo, who also serves as the chair of the Urban Forest Master Plan Task Force, said while residents might be content with the trees that presently line Santa Monica’s lanes, streets, avenues, boulevards, roads, and thoroughfares, the lifespan of these trees are soon coming to an end. Accordingly, residents are primed to decide how Santa Monica will look for at least the next 50 years, and potentially just beyond the year 2100.

“We all have trees in our neighborhoods that we know and love,” Abdo said. “In a dynamic system such as an urban forest, change is inevitable. It’s vitally important that the community has a say in how our urban forest grows.”

While two workshops have already been complete, the public still has one more opportunity to provide such input in how to shape such inevitable change to Santa Monica’s urban forest, as the third and final workshop is set for June 25 at the Main Public Library. The workshop will be held at 10:30 a.m. that day in the multi-purpose room.

A preliminary draft of street tree designations is also available to the public and can be found HERE, along with other information about the Urban Forest Master Plan Task Force.