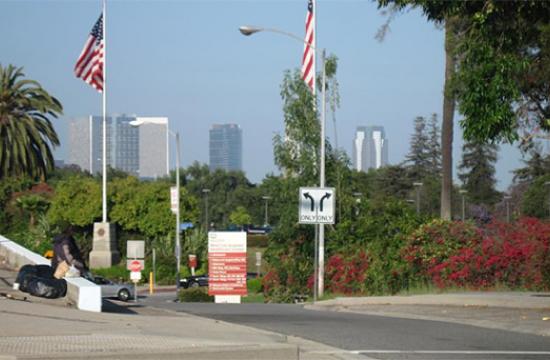 The U.S. Department of Veterans Affairs (VA) has been sued to enforce the 1888 deed that dedicated the original West Los Angeles VA property – the largest VA facility in the country – to be used to permanently maintain a home for military veterans.

A class action compliant filed June 8 in Los Angeles federal court charges “the VA has eliminated permanent housing for disabled veterans, many of whom now literally sleep outside its walls, and it now leases portions of the property to private companies, such as a rental car business and Sodexho Marriott for a laundry facility,” according to a statement released by the plaintiffs.

Named as plaintiffs in the lawsuit are four homeless veterans suffering from Post Traumatic Stress Disorder and other disabilities, suing for themselves and for other disabled homeless veterans in the Los Angeles area. Vietnam Veterans of America joined the four individuals as plaintiff in the suit, as did Santa Monica resident Carolina Winston Barrie, a descendant of Arcadia Bandini de Baker, one of the grantors on the 1888 deed. Defendants sued in their official capacities are VA Secretary Eric Shinseki and Donna M. Beiter, Director of the VA Greater Los Angeles Healthcare System (GLAHS), which operates the West L.A. property.

The present-day 387-acre campus grew out of a 300-acre gift of land from the Rancho San Vicente y Santa Monica by Bandini de Baker and U.S. Senator John P. Jones, who founded the city of Santa Monica on other land from that rancho. That deed restricted the use of the land to a permanent home for veterans. Today, Los Angeles is the capital of homeless veterans in the United States. “There are an estimated 107,000 homeless veterans nationwide, and by conservative estimates 8,200 live in the Greater Los Angeles area,” said the plaintiffs.

“The [current] misuse of the West Los Angeles campus is documented in detail in a Position Paper issued in January 2011 by the Metabolic Studio, a direct charitable activity of the Annenberg Foundation led by artist Lauren Bon, entitled ‘Preserving a Home for Veterans,’” said the plaintiffs’ statement. That Position Paper was a product of Strawberry Flag, an artwork by Bon and the Studio that took place on the VA land in question from July 2009 to October 2010. “An artwork in the form of a veterans’ program, Strawberry Flag nurtured reclaimed strawberry plants using an experimental aquaponic system,” said Bon. “In addition to creating significant veteran training and employment opportunities, Strawberry Flag brought out the potential for meaning and value inherent in often-underutilized resources. Most particularly the artwork proposed ways in which the property itself can be used to create a home-like place while the land use issues are being considered.”

The lawsuit filed June 8 also contends that the VA’s benefits program discriminates against veterans with severe mental disabilities. “A robust body of research has established that homeless individuals with severe mental disabilities cannot access necessary medical and mental services without stable living conditions combined with supportive treatment services,” the plaintiffs said. “Although the VA has recognized the importance of such supportive housing for seriously disabled homeless veterans, it has refused to offer them to Plaintiffs and other disabled veterans in Los Angeles and around the country.”

Defendants did not immediately respond to requests for comments on the 70-page complaint.

In addition to the lawsuit, the Plaintiffs and their attorneys are calling for congressional hearings to investigate the misuse of the West Los Angeles campus and the VA’s failure to ensure its benefits programs are accessible to seriously disabled veterans. In January of this year, the VA GLAHS issued a draft master plan that had been mandated by Congress 13 years ago; although veterans, neighboring residents, and the Metabolic Studio filed objections to the plan during a 30-day comment period, no congressional hearings have yet been scheduled.

“War can take a serious toll, both physical and emotional, and it is shameful when our wounded warriors return home and are left to live on our streets,” said former Adjutant General of the California National Guard, Maj. General Paul Monroe. “California has an incredible campus that was given to the U.S. government to permanently house our disabled vets. It’s past time we stopped renting it out to private companies and started using it to house and care for those who have sacrificed so much for our country.”

“It’s a scandal that the Department of Veterans Affairs is not using this land for the sole benefit of disabled veterans,” said Mark Rosenbaum, Chief Counsel of the ACLU Foundation of Southern California. “This is VA-Gate, because the VA could quite literally end veteran homelessness in Los Angeles if this land were used as it was intended.”

The Metabolic Studio position paper can be read by clicking HERE

[Editor’s Note: Mirror contributor Terence Lyons is also the veterans news correspondent for the Strawberry Bulletin, a publication of the Metabolic Studio where he writes and edits news and features that focus on veterans’ affairs, including housing issues and VA land use. He is a U.S. Army veteran and contributed to the Metabolic Studio position paper.]