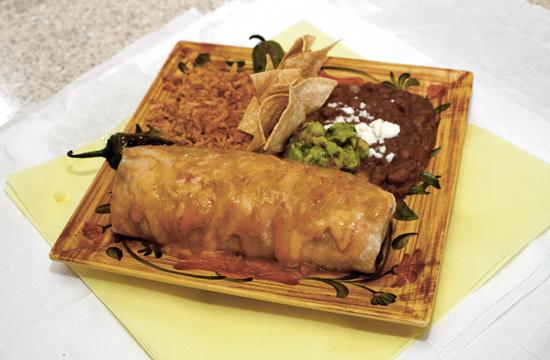 If you’re looking for the most authentic Chinese or Mexican food in town, you’ll probably need to head east of the 405 freeway. But here on the westside, we have good neighborhood Mexican restaurants that are reasonably priced and serve tasty food that falls somewhere along the gringo end of the authenticity spectrum. Benny’s Tacos on Lincoln Boulevard at Sunset Avenue is a fine example of this genre.

Benny’s Tacos opened last June at the spot long held by Campos Tacos and has since been gaining a loyal following. There are plenty of Mexican eateries on that stretch of Lincoln Boulevard, but what gives Benny’s Tacos its own personality is the fresh food and friendly staff, led by Benny Borsakian himself, who owns the restaurant and is on the premises almost daily.

“Benny’s a real cool guy,” said Santa Monica native and resident Craig Aldana, who says he eats at Benny’s Tacos a few times a week. “He’s always trying new things, and that keeps it interesting and good. The other day he had a new shrimp cocktail and he asked me to try it and give him my opinion. I ended up buying it because it was so good.” Aldana likes the healthy way in which the food is prepared, with less emphasis on deep fried food.

The restaurant prides itself on the freshness of its food. Manager Severiano Morales told the Mirror that all the food is made from scratch; meats and grilling veggies are marinated overnight with herbs and spices, and everything including the salsas, beans, guacamole, and tortillas is home made. “We try to do everything fresh,” he said, and he likes to use Mexican herbs like epazote for flavor. Morales says they don’t use lard; they use olive oil instead because it’s healthier.

Morales grew up in the city of Cuernavaca in Morelos, Mexico. He was a tennis player who dreamed about playing the U.S. Open or Wimbledon, but he traded in that dream for a restaurant career when he arrived in the United States as a teenager. After studying culinary arts at a local college, he worked nearly 20 years in the kitchens of a variety of restaurants, cooking Italian food, American food, and tapas, and he ran lunch counters in the Fairfax district and in downtown Los Angeles. But it was his mother who taught him how to cook Mexican food, and it’s her recipes that he’s adapted in a fresh and healthy way for diners at Benny’s Tacos.

Try the tasty rotisserie chicken, marinated and roasted on the spit until it’s juicy and fall-off-the-bone tender. A whole chicken is $8.95, or get Benny’s Half Chicken Plate ($7.95), which comes with pinto or black beans, rice, a side of guacamole, garlic paste, and tortillas. The chile relleno ($3.95) is made with a fresh poblano chile and blanketed with your choice of a red sauce or green tomatillo sauce. There’s also a comforting chicken soup ($4.95), menudo on weekends ($5.95), salads ($5.95), and breakfast served all day ($4.95-$7.95). A rotating $6 daily special offers deals like four al pastor tacos on Mondays and an enchilada plate on Wednesdays.

The menu is extensive with many choices. If you order tacos, burritos and quesadillas, you must choose your filling from nine options: carne asada, al pastor, lengua, ground beef, rotisserie chicken, chicken marinated in red sauce, shrimp, fish, or lobster.

Beverage choices include home made horchata, tamarindo, and lemonade ($1.50-$1.85), and assorted bottled drinks including Mexican Coca Cola. An alcohol license is in the works and will soon add beer and wine to the list. For dessert, choose a warm custard-filled churro ($3.25) or a cool Klondike Choco Taco ($2.50).

Inside the small restaurant is a terra cotta tile floor, chicken-themed window decor, and a handful of bright blue and orange flower-patterned tables, each with a small flowerpot. Order and pay at the counter, and your order will be served on real plates and utensils and brought to your table by a server. Mexican music radio station Recuerdo 103.9 plays in the background, and two TV screens are tuned to a Mexican soap opera. There’s another handful of tables on the outside patio, and a generous supply of parking spaces, all adding up to make Benny’s Tacos a go-to place for westside-style Mexican food