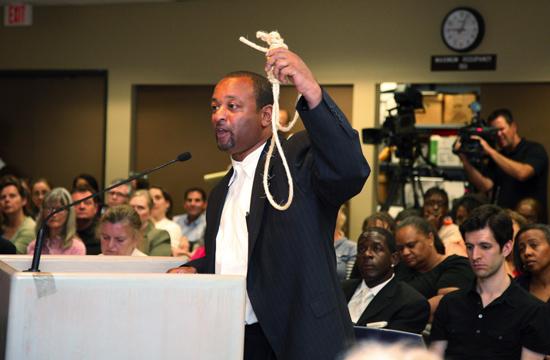 In the nearly two weeks since media, both local and national, have swarmed on a possible racial incident involving wrestlers at Santa Monica High School, several additional developments have occurred: Santa Monica police have asked the Los Angeles County Sheriff to handle the investigation of the school’s administration; a civil rights group has filed a complaint with the Department of Justice; and the community had an opportunity to weigh in on the matter at last week’s school board meeting.

Public outrage and shock was evident at the June 30 Santa Monica-Malibu Unified School District (SMMUSD) School Board meeting as almost 40 speakers expressed their views on an alleged May 4 SaMoHi racial incident. Their input was part of a board discussion on what steps the district should take to help avoid similar incidents in the future.

On June 21, the Santa Monica Police Department (SMPD) began investigating a hate crime case following a May 4 incident in which a black wrester found a brown wrestling dummy that was suspended with a rope around its neck in the gymnasium of Santa Monica High School (SaMoHi). The black wrestler was then strapped to a locker by his teammates, who used a chain from a belt loop on his pants. His teammates also allegedly made racial remarks, which reportedly included “slave for sale.”

“There is no doubt in my opinion that a hate crime was committed,” Najee Ali, the Director of Project H.O.P.E., said to the school board while holding a noose. Terrorizing anyone with a noose is a criminal offense in the state of California. “Superintendent Cuneo and school officials’ delay in reporting a hate crime and not notifying the mother of the victim, Victoria Gray, was part of the shameless cover-up of this vicious, racist attack and hate crime. We now know the police were never called by district officials and they collected cell phones and deleted photos of the incident. We believe the school’s disciplinary action against the students, which was a three-day suspension, is also inadequate.”

Ali’s group filed a complaint on June 5 with the Los Angeles District Attorneys’ office, calling for charges to be filed against all those responsible for the hate crime and its cover-up and for the students involved to be charged with a hate crime.

“Not reporting the crime aside, destroying photos (or evidence) is an obstruction of justice and can lead to criminal prosecution,” Ali said in the statement.

The complaint sites California Penal Code, Section 11411 which reads that: “Any person who hangs a noose, knowing it to be a symbol representing a threat to life, on the property of a primary school, junior high school, high school, college campus, public park, or place of employment…..shall be punished by imprisonment in a county jail not to exceed one year, or by a fine not to exceed five thousand dollars ($5,000).”

“Superintendent Cuneo, and school officials’ delay in reporting the hate crime and not notifying the mother of the victim, Victoria Gray, were part of a shameless cover up of a vicious racist attack and hate crime,” Ali said in a statement about the complaint. “Without question a hate crime was committed.”

“A cover-up is never good. How can we solve a problem if it’s never discussed?” said Oscar de la Torre, a board member, after hearing the public input. “I can’t be on a school board that allows a cover-up.”

Melvin Snell, the founder/director of Los Angeles Humanity Group Foundation, found the incident disturbing enough to write to the Department of Justice to request a formal investigation.

“This was a hate crime by any textbook standard,” said Dawn Smith, a SaMoHi student. “If someone hangs a noose on a mannequin they are saying to Afro American students: this is you. It’s been proven Afro Americans were hung in the ‘50s, ‘60s and it’s still happening today in other countries.”

Debbie Mulvaney, president of SaMoHi’s parent, teacher, and students association, expressed her concern about the lack of communication with SaMoHi parents regarding this incident. “No one should be getting their facts from the newspapers instead of from the district,” she said.

“Why are the police here tonight?” asked Lee Jones, another SaMoHi, parent, referring to the strong police presence in the packed school board chambers, “and they were not at SaMoHi on May 4?”

Robert Forster, the wrestling team’s volunteer coach, had another view of the incident. He said that he had spoken to all the students involved and there has been a rush to judgment.

“Being locked to the locker was a prank, not hazing,” Forster explained. A statement from the Santa Monica Bay Wrestling Club, which e-mailed a statement to the press last week, also makes this argument, indicating that nearly every student on the team, regardless of race, has been the subject of this prank at some point in the season. “It’s a funny thing athletes think is funny in the locker room,” Forster said.

He also pointed that the athletes regularly tie up the dummy for practice. When the normal way of hanging up the dummy didn’t work, a student who was not a member of a team made a noose to hang it up.

“The rope was tied in a noose-like knot at some point, just as a way to try to set up the dummy for practice,” reads a statement from the Santa Monica Bay Wrestling Club. “This was an understandably disturbing scene to some students, both black and white, but any noose symbolism was not the stated intent of the actions.”

The Los Angeles Times reported that students involved have since been suspended or received other discipline. Additionally, the entire wrestling team has undergone sensitivity training.

“On the surface, and as it was reported in the press, these two incidents seem related and can be misconstrued by outsiders as racially motivated,” the wrestling club’s statement reads.

“People aren’t trying to find out what really happened,” said Louis Yasono, a current member of the team, who stated that the incident was just a prank between friends.

The board also heard from several past captains of the wrestling team. Benjamin Ura stressed, “every kid in that room … is a good kid … they are just kids and kids make mistakes.”

“It was our failure not to inform you,” said Superintendent Tim Cuneo to Victoria Gray, the students’ mother, at the June 16 School Board meeting, after she requested the board create a policy that ensures parents would be informed if their student is harassed. Gray did not find out about what happened to her son until five weeks after the incident when another parent told her.

“We must take this painful episode and turn it into a learning experience,” stressed Board member Laurie Lieberman.

The Associated Press and the Los Angeles Times reported accusations that administrators destroyed evidence. Sgt. Victor Lewandowski of the Internal Investigations Bureau of the Sheriff’s Department said he couldn’t comment on an ongoing investigation and that it was too early in the investigation to state what the high school administration might be charged with.

SMPD officials said the sheriff’s involvement is to avoid any perceived conflicts of interest, citing the close relationship between the school district and the City of Santa Monica. “This referral is routinely made to avoid any appearance of a potential conflict of interest; it does not signify any determination by the police department that any administrator acted unlawfully,” notes a statement from SMPD.

Once the investigation is complete, School Board President Jose Escarce explained that the board would then build on the report from law enforcement, which will include their own independent investigation. The board directed district staff to review their curriculum on diversity, tolerance, and ethnic sensitivity, have additional training for staff on racial and ethnic sensitivity, modify policies related to this incident, to reconstitute the district’s Intercultural District Advisory Committee, and to continue to give support to the students and families involved.