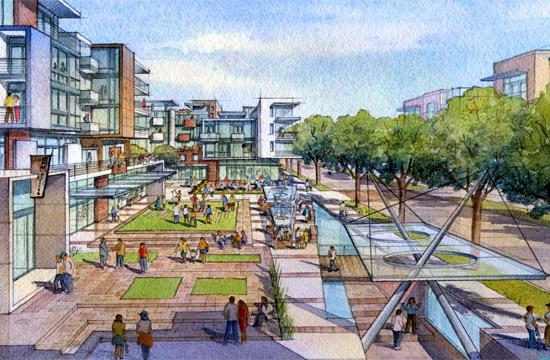 The Santa Monica City Council has certainly had its fill of development agreement (DA) discussions these past few weeks. First it was Yahoo! Center, then Saint John’s Medical Center, and, at its July 12 meeting, a barebones council unanimously approved a DA for a mixed-use project in the shadows of the proposed Bergamot Transit Village on Colorado Avenue.

Residents at the meeting expressed concerns about the development by applicant E.D.D.G., Inc., which may face a tough battle in balancing public and council input.

Actually presented as three separate DAs, the planned Roberts Business Park (or Roberts Center) would include the construction of four buildings totaling nearly a quarter million square feet; the Lionsgate headquarters project; and the Village Trailer Park. The Lionsgate project was just presented at the City’s most recent planning commission meeting, while the Village Trailer Park project is still undergoing an environmental review.

Special Projects Manager Jing Yeo told council members that the Roberts Center campus will feature a 50/50 balance between housing and creative arts buildings. She also pointed out in between each building was a substantial amount of open space.

Yeo said the Roberts Center development not only fulfills the ideals of the Land Use and Circulation Element (LUCE), it will also establish the ideal mixed-used community.

“The LUCE also requires enhanced Transportation Demand Management (TDM) measures, community benefits, and nearby residential components for a balanced land use mix that helps to reduce trips near transit corridors,” Yeo said in her staff report. “These elements promote the goal of creating a complete, walkable community, including creative arts employment, neighborhood-serving retail, and market-rate and workforce residential.”

As the Roberts Center project was presented as a “float up,” the DA is still a ways away from being adopted by council members; several community meetings are in the works, giving residents an opportunity to provide input or recommendations on what changes they would like to see be made to the development.

Among the concerns expressed by local residents at the council meeting was increased traffic.

“We definitely need the area plan to see how all these projects fit together. We really need to be concerned about how we discourage cut-through traffic on these streets,” former mayor Paul Rosenstein said. “Our existing streets are overly impacted already. All of these plans, as noble as they are, as exciting as they are … will add traffic to the area.”

The applicant told the council steps are being taken to install a traffic plan and comply with the LUCE.

“This represents a conceptual plan. It will minimize traffic through a comprehensive TDM program,” Dale Goldsmith, a land use attorney with Armbuster, Goldsmith, and Delvac said. “We’re looking forward to … direction and input from the city council so that we can go back and work with staff and bring back … an excellent project that fully implements the principles of the LUCE.”

Mayor Richard Bloom asked staff if it were possible to consider accelerating the conversion of the one-way stretch of Pennsylvania Avenue into a two-way street in order to determine how traffic would be altered.

Zina Josephs of the Friends of Sunset Park board wrote to council members that the group’s opposition to the Roberts Center is not indifferent from its position when the Lantana Campus expanded its campus on the south side of Olympic (between Stewart and Centinela) with two new buildings. She said the FOSP board opposed the Roberts Center in its current form because it believes, just like the Lantana Campus, the Colorado Avenue development will not be able to mitigate traffic impacts on residential neighborhoods.

Instead of considering each of the three Roberts Center projects as individual DAs, Josephs and the FOSP Board urged council members to deliberate the trio of developments collectively. Giving credence to this claim is the fact that the LUCE establishes the Roberts Center project as a creative arts district within the purview and context of the larger Bergamot Area Plan.

“The FOSP Board urges the Council to consider the three adjacent Development Agreement projects on Colorado Avenue between Stewart and Stanford (Colorado Creative Studios, Roberts Business Center, and Village Trailer Park) together rather than separately,” Josephs wrote in an email, adding the consideration should be done after the federally funded Master Plan for the area is completed. “Those three projects total (more than) 670,000 sq. ft., and a total of (more than) 2 million sq. ft. of development projects is already planned for the Bergamot/Creative Mixed Use area.”

Part of the issue is each of the three projects have separate owners.

Another concern raised was the balance of a mixed-use arts district and a highly-concentrated residential neighborhood in light of the planned Village Trailer Park and neighboring apartment buildings.

In addition to commenting on several specific elements of the staff report, Josephs also stated the FOSB board sought disclosure from Council members Bob Holbrook, Pam O’Connor, and Terry O’Day about the respective donations they allegedly received from the Roberts Business Center during the 2010 election.

It was also unclear, some residents pointed out, what community benefits the applicant would be providing should the DA ultimately be approved and the project be built in its current incarnation.

O’Day said he hoped the Roberts Center project would be a great opportunity to incorporate several pro-environment features, including substantive facilities for electric vehicles and water conservation.

As the shorthanded council approved the float up in a unanimous vote, E.D.D.G., Inc., will revisit its plans and, presumably after working with city staff and receiving community input, will return to City Hall with a formal DA application.

The council met with a bare quorum on July 12, as Mayor pro tem Gleam Davis and Council members Bobby Shriver and Kevin McKeown were not present.