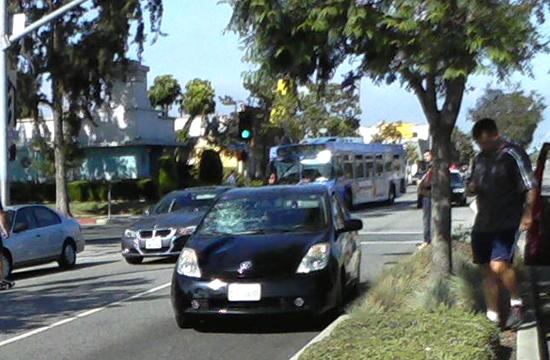 An elderly woman was killed on July 17 after being hit by a car on Pico Boulevard at around 9:30 a.m. in Santa Monica. The death is the fifth traffic-related fatality in Santa Monica thus far this year.

The 80-year-old pedestrian was walking west on the south side of Pico Boulevard, approaching the intersection of 26th Street, when she crossed into the road, heading northwest. Sgt. Richard Lewis, the public information officer of the Santa Monica Police Department, said the victim entered the traffic area about 20 feet in front of the designated pedestrian crossing path, and did so before the light changed to green.

“It is a horrible accident,” said Lewis, who added that no charges had been filed against the 82-year-old female driver of the black 2004 Toyota Prius that hit the woman. The driver immediately stopped and cooperated with the investigation. She voluntarily submitted herself to a blood test to screen for any influences that would have impaired her driving.

“We have no reason to suspect she was under the influence,” Lewis said.

Upon arrival, officers contained the scene and tended to the victim until fire department personnel arrived and transported her to a local trauma center. Officers estimated that the vehicle was traveling under the 35 mph speed limit, but going at least 30 mph when she slammed into the woman, who succumbed to her injuries at the hospital.

The name of the victim had not yet been released as the next-of-kin had yet to be notified. There were several witnesses who observed the accident and provided statements, but officers are still conducting investigations. Anyone with any information regarding this matter is encouraged to contact the Santa Monica Police Department. Sgt. Richard Lewis can be reached 310.458.8462 or at richard.lewis@smgov.net