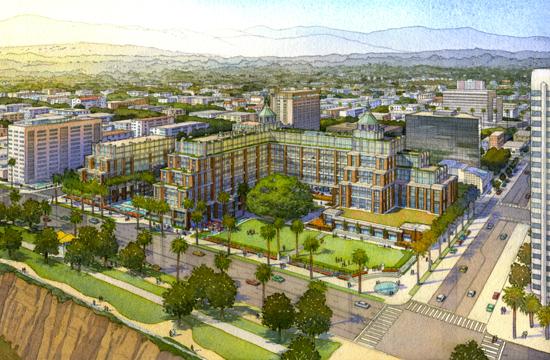 Santa Monica’s iconic hotel, the Fairmont Miramar, has a fascinating history which is documented in the new exhibit “Life at the Miramar,” showing at the Santa Monica History Museum. At the same time, the Miramar is about to undergo a renovation project, the latest in a series that the hotel has experienced in more than 100 years of existence.

Sponsored by the hotel and its management company MSD Capital, L.P., the exhibit is curated and designed by Anna Lisa DeBois, Ricardo Bandini Johnson, Ho Nguyen, and Robert Baxter.

The documentation includes photographs, letters, legal documents, and clothing and other objects from past eras. Most of the material is from the Farquhar-Jones estate (the owners of the original Miramar).

Senator John Percival Jones came to California in the 1880s and co-founded Santa Monica with Robert Symington Baker. He bought a deed of land (shown in the exhibit) from Arcadia Bandini de Baker, whose family owned a great deal of land in the area. On this land, in 1889, he built the Victorian-style mansion that was the original Miramar, as his family’s residence. Photos show this building with its turrets, chimneys, and front veranda, surrounded by lush plantings. Georgina Sullivan Jones, the senator’s wife, was responsible for planting trees on Santa Monica streets. She planted a rose garden, as well as a small Moreton Bay fig tree given to her gardener by a bartender who claimed that an Australian sailor had given him the sapling to pay for a drink. That little tree grew into the huge Moreton Bay fig tree that is now a landmark and a major feature of the Miramar’s front courtyard.

Some of the artifacts from those days include a guest book from the 1890s, white gloves, an umbrella with a white satin wrapped handle, and a ruffled blouse. All the garments in the exhibit were painstakingly restored by Anna Lisa DeBois.

The Miramar entertained many guests, including John Muir, Mark Twain, and Susan B. Anthony. It had 40 rooms with a ballroom that took up much of the second floor.

In 1912, King Gillette, inventor of the safety razor, purchased the Miramar from Georgina Jones for $77,500. Gillette later sold the mansion to Gilbert Stevenson, described as “an eccentric hotelier.” He turned the private mansion into a hotel, adding the more modern Miramar Apartments at Second Street and California Avenue. The Miramar Hotel thrived in the 1920s when Greta Garbo was a notable guest, and into the 1930s, when Jean Harlow dined there and Betty Grable sang with Ted Whidden’s band at the Miramar lounge.

The Miramar changed hands a few more times. The original edifice was demolished in 1939, under owner Thomas Hull, while the Miramar Apartments survived and the grounds of the old hotel gave way to a swimming pool and bungalows. Photos show soldiers hanging out at the pool in the 1940s when the hotel was a re-distribution center for the U.S. Army Air Corps (Air Force).

Brochures document the changes to the Miramar’s appearance as successive owners redeveloped the building to a 10 storey structure, preserving features like the 12-foot ornamental gate at 101 Wilshire Boulevard.

The hotel has been known as the Fairmont Miramar since 1999 when Moritz, Wolff and Company assumed management. In 2006, management became MSD Capital LLP, with ownership by MSD affiliate Ocean Avenue LLC.

Under the new revitalization plan, recently announced by Ocean Avenue LLC, the design architect for the 4.5-acre property is John Hill of HKS Hill Glazier Studio, who also designed the Shutters Hotel. Assisting him is Robert Chattel, a historic preservation architect.

The Moreton Bay Fig Tree will be a major feature of the new exterior design, which will also include a plaza at the corner of Wilshire Boulevard and Ocean Avenue, and the Miramar Gardens, an acre of landscaped open space behind the plaza.

The existing building will be renovated. Some walls will be removed to make the property more open; there will be a modest reduction in the number of hotel rooms and existing rooms will be made larger.

The proposed project, according to a preliminary fiscal impact report from PKF Consulting, will generate approximately $8 million per year in additional new taxes and fees to the City of Santa Monica.

“Many in the community feel that the recent opening of the highly successful Santa Monica Place has shifted the balance of Downtown Santa Monica to the South,” said Alan Epstein of MSD Capital. “We believe the Miramar revitalization project will anchor the northern end of the Promenade, encourage other economic activity nearby and restore the balance to Downtown.”

A presentation on the proposed project was held in March for representatives of Downtown Santa Monica (formerly the Bayside District). More hearings will be scheduled with the City of Santa Monica as the project’s plans become more solidified.