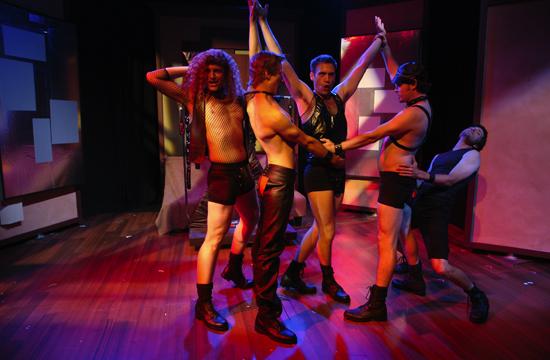 Kenny Solms is a veteran writer who helped create TV’s “Carol Burnett Show,” and who has penned many TV shows, stage performances, and movies. His new play “It Must Be Him” should maybe instead be called “It Might Be About Him” After all, it is about a TV writer named Louie Wexler and the stage set does include what appears to be actual posters and photos from Solm’s career. Considering the troubles that Louie has however, one has to credit Solms with daring to put his personal demons out there and let everyone laugh along with him.

Louie has a Beverly Hills home, a cherished Emmy trophy, an irritable agent named Ross, an undocumented Latina housekeeper named Ana, a pile of debts, and a house guest, cute boy toy Scott, who lives in the guest house although Louie would prefer that Scott sleep with him. Scott won’t commit and Louie, in a last-ditch hope of winning him over, changes his latest script to allow Scott to have one of the male lead roles. What was to have been a routine Hollywood romantic comedy with a male and female lead will now be a guy-guy romance. Ross, Ana, and Miles the lanky personal assistant, agree that a gay romance script is the way to go. Louie, who grew up in the time when gays had to stay in the closet, is a bit unsure of this change. In flashback fantasy sequences, he imagines his parents, brother, and high school girlfriend getting on his case.

But Louie is broke and tired of waiting for Mr. Right. So he makes the changes and comes up with—well, several varying scenarios, each a bit crazier than the last.

The lengthy first scene, replete with Louie crying out “My life! My life!” and envisioning his dead parents while sparring with his very much alive agent, housekeeper, and almost-lover, is fast-paced in the sketch comedy style that Solms knows well. But it seems strained at times, as if the real humor to be found in Louie’s problems is waiting in reserve. The play really takes off in the second scene, at a first reading of Louie’s revised script, and thereafter gets funnier and funnier.

Anyone who has ever tried to write a screenplay or TV script will appreciate the humor here as Louie’s rewrites cause him to reveal all his long-buried sexual fantasies and thoughts on being gay. The almost surreal enactments of the revisions sets the play up for getting more serious as Ross freaks out at Louie’s ideas and as Louie moves toward what he anticipates will be a lose-all conclusion. Does a happy ending happen anyway? Okay, it does but how it happens is a surprise not to be revealed here.

David Pevsner, who plays Louie, is almost constantly on stage and keeps up a steady stream of energy in the role, never overplaying, keeping the character sympathetic. Likewise, Stephen Marshall, as the long-suffering agent Ross, avoids the usual Hollywood agent mannerisms in his portrayal. Nick Cobey does well as Scott and Veronica Alicino steals a few scenes as the housekeeper Ana. Among the ensemble members, Stephen Smith Collins draws many laughs playing several characters while wearing several different hairpieces.

Director Brian Drillinger makes the best of the very small Edgemar stage space, extraordinarily pulling off a couple of musical numbers (written by Larry Grossman and Ryan Cunningham in a perfect spoof of modern Broadway musicals) in which the tiny stage area comes alive with a cast of less than a dozen actors making like a major chorus line.

“It Must Be Him” isn’t heavy fare and its style will remind some of mainstream television comedy. But it makes for a fun time at the theatre.