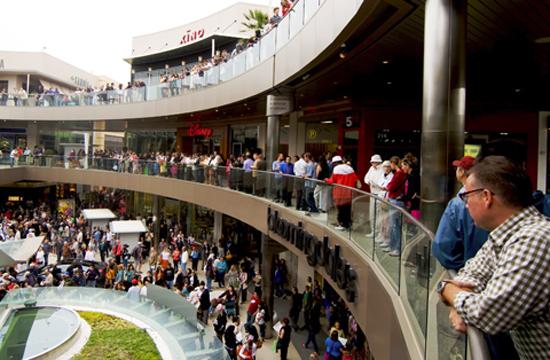 Santa Monica Place reopened in August of 2010 after a $270 million revamp, a year that saw only a handful of shopping centers open across the nation, which was largely attributed to the economic climate. As the one-year anniversary of its reopening nears, some of its retailers have reported business at the revamped shopping center is a challenge.

“I need at least a year in a location to really see how things are going,” said Fraiser Ross, owner of Kitson and Kitson Kids at Santa Monica Place. “I did well at Christmas – even during the seven days of torrential rain and the opening was a boon.”

Ross owned Kitson on the Third Street Promenade prior to Santa Monica Place’s reopening. He also has other stores in Los Angeles. He noted that business picked up in late spring and he expects summer sales to be exceptional.

However, he is still trying to find the right merchandise mix for this mall for these tough times. He is considering a mix of half luxury and half general merchandise. His Santa Monica stores currently carry merchandise for every price point because the mall gets customers from every demographic. “I thank god for the tourists in these challenging times,” he said.

Ross thinks it’s ridiculous to have the City raise the sales tax a half-cent back in April and require people starting in September to have to use recycled bags. “This is the wrong time to demand this kind of thing in this kind of economy for small business,” he said.

“There is not the traffic I expected in SMP,” said Michael Alnabolsi, owner of Sea of Silver, who also made the move Santa Monica Place after 18 years of operating his family-owned business on the Third Street Promenade. Alnabolsi finds business at Santa Monica Place to be inconsistent and its higher end clientele often ask for different merchandise than he offered on the promenade. His store currently offers merchandise ranging in price from $50 to $600.

Repeat customers from the promenade and their referrals keep Sea of Silver afloat. Alnabolsi also said he wishes the shopping center would direct more advertising to tourists.

Macerich, the company that owns Santa Monica Place, paints a very different picture on sales at the revamped mall.

“Santa Monica Place is a great success and it has very strong foot traffic,” said Bob Aptaker, the Vice-President of Development for Macerich. Aptaker predicts that the shopping center’s strongest season will be in the summer. Aptaker also mentioned that there is has been very positive feedback from social media and the retailers. In his view “the reason people come to the mall is not only for the retail offerings but also for the experience.”

Aptaker points that the previous incarnation of Santa Monica Place had its sales peak in 1999, before Macerich bought it. “However, it is doing much better today than any time in the past,” he said. Since its opening only one store, E5H, has closed and another retailer quickly filled its space for temporary use.

Taylor also said the shopping center’s sales for the fourth quarter of 2010 were $52 million, more than half the total from adding the total sales of Santa Monica Place and the Third Street Promenade together. That total was $92 million.