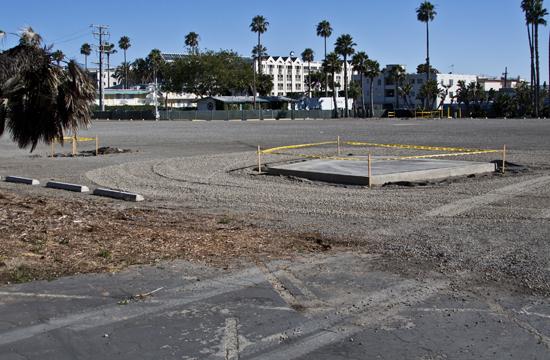 Although site preparation work is already underway for the planned park to be sandwiched between Santa Monica City Hall and the Pacific Ocean, a process is just beginning to name the new civic attraction.

The Parks and Recreation Commission (PRC) plans to discuss options for a permanent name for the Civic Center park at its July 21 meeting. If a series of public workshops and surveys are to have any impact on the matter, the current moniker “Palisades Garden Walk” may not be the permanent name chosen for the planned Civic Center Park.

After four community workshops on park naming, about 121 surveys were submitted by participants, each one selecting a specific name from a list of suggestions. According to a staff report prepared by Assistant Director of Community and Cultural Services Karen Ginsberg, for PRC’s July 21 meeting on the issue, the tallied votes indicated Civic Ocean Park, with 15 votes, was the most preferred name.

“Since the Recreation and Parks Commission has purview over parks, and is thus the related advisory body, it is appropriate that it take comments and make a recommendation on a name or names for the park,” she wrote in her staff report to commissioners.

A week earlier on July 12, City officials announced site preparation work was under way, as workers were setting up the location for construction. According to Ginsberg, work currently being done at the future park location includes “the removal of parking lot surfaces and fixtures that have been used for employee and event-related parking in recent years.”

Additionally, two days later, the California Coastal Commission formally approved at its July 14 meeting a city permit to build a new Civic Center park. The approved permit essentially allows the park to be developed according to submitted plans, which calls for a 6-acre municipal park with varied topography, native drought tolerant and non-invasive plants, walkways, water features, a children’s play area, view overlook, seating benches, artwork, bicycle racks, and public restrooms. Among the features highlighted at the planned park are walkways for pedestrians and bicyclists and a one-acre site adjacent to the park and in front of City Hall.

With the Coastal Commission approval and the PRC making a determination on the park’s permanent name, one of the cornerstones of Santa Monica’s ambitious public works projects is underway. In addition to the park project, the City also aims to realize the completion of other key developments throughout Santa Monica, including the revitalization of the Civic Auditorium, addition of the Pico Area Branch Library, and Exposition Light Rail-related projects, such as Colorado Esplanade and Bergamot Village. As the City’s various developments come to fruition over the course of the next five years, among the most scrutinized changes at the Palisades Garden Walk site include the relocation of trees.

Ginsberg further stated two ficus trees “are in a serious state of decline” and “will be removed and not relocated due to their poor condition.” Three ficus rubinginosa trees currently sitting on the future park site, affectionately referred to as the “Three Amigos,” will also be relocated to make way for the planned extension of Olympic Drive between Main Street and Ocean Avenue. The trees will be lifted from their current location to another spot about 550 feet away within the same site.

Santa Monica residents can track the construction and related work via updates and photographs posted on the project’s Web site at smciviccenterparks.com