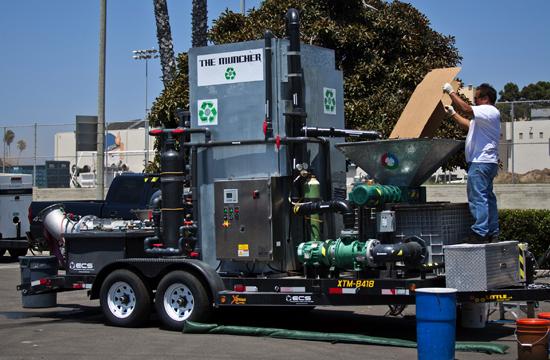 Ecologico Logic, Inc., brought a large metal prototype to the Santa Monica Civic Center parking lot on July 28. They said this machine will be revolutionary.

“The Muncher” takes waste in landfills (municipal solid waste, green plant and tree clippings, paper and cardboard, animal feces, and many forms of inorganic waste) and, “by combining superior mechanical efficiency with powerful, naturally occurring, aerobic (oxygen-breathing) microorganisms,” speeds up the decomposition of the waste and does no harm to the environment, according to a press release. What would take months or years to decompose into compost can now take less than one hour.

“The Muncher’s” Santa Monica debut demonstrated the effect. The prototype demo unit can process five tons of waste per day. The actual full-scale machine can process 500 tons per day.

For more information on “The Muncher,” go to Ecologicologicinc.com