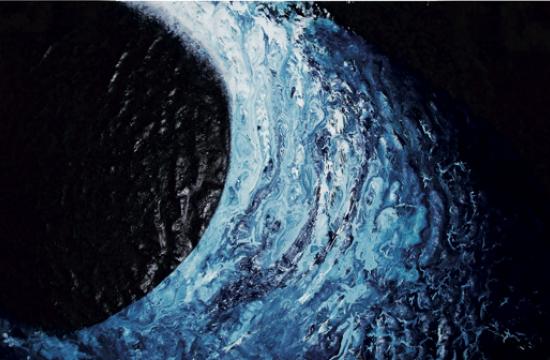 A series of paintings exploring the nature of water, and a book about recovery from back surgery-what do they have in common? They are both the work of Pam Douglas, an artist and writer who has been exhibiting the painting series “The Life of Water” at Bergamot Station’s TAG Gallery, and who has just published the book “Back to Life: A Journey of Transformation through Back Surgery” for which she held a book signing on July 10.

Douglas has always considered herself to be an artist first. She studied art history at Vassar College and obtained a master’s degree in art at Columbia University. However, “I realized I couldn’t make a living as a painter. I could make a living as a writer,” she said.

For 20 years, Douglas did not paint but she became a successful television writer. She authored the book “Writing the TV Drama Series” which is about to be published in a third edition, and she teaches television writing at USC.

What brought Douglas back to her first love was the serious back pain that led to surgery in 2002. “Because I was popped out of my normal pace of things, it was necessary for me to take a look at what mattered. As a result of five months of not being able to get out of bed, I found the art I had strayed away from. It took a while for me to get my footing but once I did, it all started coming back.”

Since then, Douglas has had a show at TAG every year. She likes to do shows in series and “The Life of Water” is the first in a series of three shows about elements (the others will examine fire and air).

Certainly water is a calming theme-or so it would seem. Douglas noted that water is usually “contained” but that “the drama is when it breaks out of the containers” as in floods and tsunamis.

The ten paintings in the TAG show are rendered in inks and acrylics on unstretched raw linen. Douglas painted on the linen while it was wet, which created very fluid effects. “Unleashing the energies of nature on to a tamed, perfectly stretched, flat canvas feels inhibiting. To me, nature should be on as natural a surface as possible….”

The predominant colors are various shades of blue but black, white, gray, and some green and yellow tones also make an appearance.

“Flying Water” appears to be a wave, blue with white touches, as it crests upward. Douglas said that some people have seen the curved shape as the edge of the earth seen from space. She likes the idea that people can see whatever they want to in the shapes of her paintings.

“I had a surfer in [the gallery] looking at [“Flying Water”] and he was moving around, waving his hands like he was surfing!”

In “A Memory of Rain,” thin lines of white rain fall into blue-gray puddles against a black background. This painting might be perfect for looking at while meditating.

“Waves” is a diptych-two paintings hung together. Each depicts a bluish wave, but the waves curve in opposite directions-unless one painting is hung the other way in which case the two waves join and the result looks like one painting.

Similarly, there are two “Water Blessing” paintings featuring water streaming either down into a pair of hands or out from the hands, depending on one’s perspective.

“Wetlands,” which introduces green and yellow colors, evokes the swampy growths of the nearby Ballona Wetlands. It also, to some, looks like a reptile, possibly a lizard.

The seemingly mysterious painting, “Genesis,” requires that the viewer’s line of vision move from left to right. What looks at first like a chaotic area of pinkish paint, surrounded by ripples, morphs into a human form.

One can sense that “The Life of Water” helped Douglas heal, as she also chronicled her journey of healing in “Back to Life,” a memoir of her pre-during-and-post surgery period. The book is written as a collective diary, with comments by Douglas, friends, family members, and doctors, as she lives through the days and months of the surgical process.

“The Life of Water” runs through July 16 at TAG Gallery, Bergamot Station, 2525 Michigan Avenue, 310.829.9556. “Back to Life: A Journey of Transformation through Back Surgery” is published by Divine Arts and can be purchased through DivineArtsMedia.com or Amazon.com