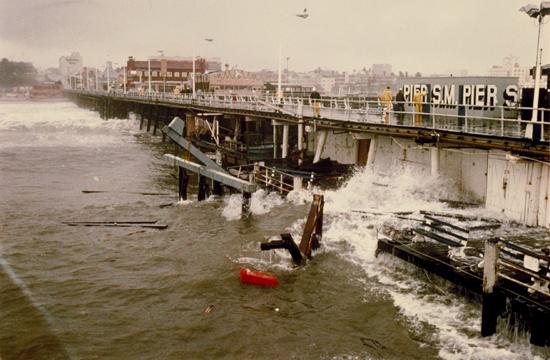 The Santa Monica Pier may soon function the way it did almost 30 years ago, as the city council is considering the addition of a boat landing at the end of the iconic venue. Even more, the United States Navy, actually made use of the landing prior to its destruction in the winter of 1983, may become more involved with the Santa Monica Pier again should the City approve and move forward with its plans.

While the matter has yet to be formally taken up, Council member Bob Holbrook indicated Santa Monicans may soon be able to relive the Santa Monica Pier – which is actually two piers, the longer Municipal and shorter Newcomb – in a reincarnated state.

“The council (indicated) we should have a landing on the pier,” Holbrook said, providing a brief history of the venue’s past. “The City is going to restore the landing. It would be a landing (floating) on the water, so it could rise and lower with the tide.”

On March 1, 1983, a severe winter destroyed about one-third the pier; which was already damaged from a similar storm five weeks earlier on Jan. 27. Other physical structural casualties beyond the pier landing, included damage to a harbor patrol station and a variety of shops and café’s.

Rebuilt soon thereafter in its current form, the pier has been a smaller shadow of its former self. Prior to the 1983 winter storms, vehicles were allowed to drive the length of the pier. There was also a lower second deck, where fisherman gathered regularly and a landing for ships to dock.

The pier was eventually rebuilt at the same length (about 1,600 feet) as the original structure. By April 1990 it was reopened to the public, according to Jim Harris of the Santa Monica Pier Restoration Corporation (PRC). While the shops, cafes, and harbor patrol station returned to the pier, gone was the lower second deck and complete vehicular access.

Also absent is the landing, preventing boats from docking into the landmark structure. Fisherman and boat operators alike have been unable to enjoy the pier as they were able to nearly 30 years ago. In actuality, the landing would be more of a gangway used specifically for immediate and practical access during emergencies on the pier, Harris stated. He also added the gangway/landing could potentially be used for commercial purposes.

Council members and the PRC hopes City Hall will formally consider the landing at the council’s sole meeting in August.

As another practical matter, Holbrook said he would like to see the potential landing open the door for the Navy or Blue Angels to utilize the pier during Fourth of July festivities. When the Navy or Blue Angels are not around, the landing could be open to commercial fishing boats. In the rare occurrence disaster strikes the pier as people are on it and emergency vehicles cannot access portions of the wharf from land, the landing would allow a first responder to gain access to the pier by sea.

Members of the general public, however, would not be allowed to access the gangway.

Coincidentally, on July 31, members of the public may have a taste of what it would be like to have Navy sailors in town should the potential landing serve as a conduit between the city and one of the two aquatic branches of the American armed forces.

As part of Navy Week festivities, council members unanimously approved a request by Holbrook to co-produce a Navy Day at the pier on July 31 and allocate $6,000 of City’s contingency funds to bring 300 Navy sailors into Santa Monica, fully decked in their white uniforms, for a series of excursions in town, including a possible performance by the Navy band on the pier.

The financial allocation would cover direct expenses incurred by the City and the Pier Restoration Corporation to co-produce the event. As part of Navy Week festivities throughout Los Angeles County, Holbrook explained that 300 sailors visiting Santa Monica would actually be transported here from the Los Angeles/Long Beach Harbor. On July 31, five Navy ships and 5,000 sailors would be docking there.

“I had a conversation with a member of the Navy League. He explained five ships were coming to the Long Beach-San Pedro Harbor with 5,000 sailor on it, and he said they were trying to figure out a way to distribute these people to visit communities and just have fun,” Holbrook told his colleagues on the dais during the July 12 council meeting.

“They discovered there was a possibility we could do a joint venture with them and help them transport these sailors from the ships to the city and back.”

As American sailors prepare to visit the pier later this month, it may not be too long before the landmark is much more interactive with the Pacific Ocean than in its current form.

If the landing is approved by council in the coming weeks, Holbrook hinted the landing could possibly be complete by December 2012.