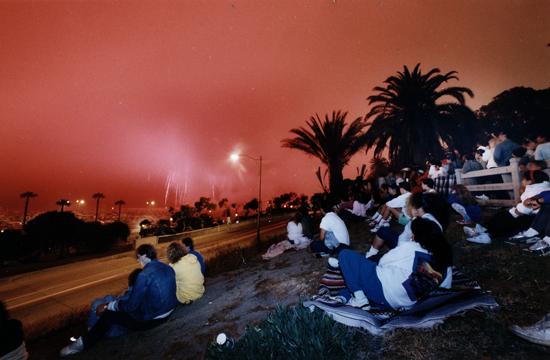 Officials of various departments, agencies, and businesses in Santa Monica are asked every year: Why doesn’t Santa Monica have fireworks on the Fourth of July? More specifically, why isn’t there something on the Santa Monica Pier, or at least the beach?

“Unfortunately, the Santa Monica Pier has not hosted fireworks since 1991,” notes a lonely message on the pier’s website. “However, the firework show from the Marina del Rey and Malibu are visible from the pier.” But Marina del Rey won’t have fireworks this year, either.

Anyone on the pier on Independence Day will see throngs of people looking to other communities, miles away, for their celebrations. Some of them arrive not realizing Santa Monica no longer puts on its own show.

“Still today, people come looking for fireworks,” said Lt. Jay Trisler of the Santa Monica Police Department. The confused influx is substantial enough to warrant police action, even 20 years later. Trisler said the City puts up electronic road signs and has officers handing out fliers on the pier warning people there are no fireworks shows to see.

This effort is nothing compared to the all-out force it used to take to manage Santa Monica’s festivities.

For 25 years, the City put on a fireworks show on the pier, and people would come from all over Los Angeles – bringing with them all sorts of problems.

“Basically, the Santa Monica Pier was a real hotspot for Fourth of July celebrations, a wonderful place to watch the fireworks,” said Jim Harris, the Pier Restoration Corporation’s resident historian. “But there were escalating concerns of violence in the area, crowds and congestion.”

A report in the Santa Monica Observer from 1986, the last year fireworks were held on the pier, cited some 200 fights, including 12 felony assaults, and two gang-related shootings, one of which resulted in the death of a 16-year-old boy. The report also describes brushfires from illegal fireworks and unprecedented gridlock as 500 thousand people flocked into Santa Monica. Streets, alleys, the freeway, and the Pacific Coast Highway were all filled with cars, which prohibited ambulances, fire trucks, and police from getting anywhere.

Lt. Trisler described how the only way to attempt to manage such chaos was to strategically station medical emergency personnel in various locations because the roads were at a standstill.

“Drinking and fireworks violations on the beach and on the Santa Monica Pier were so blatant by 8:30 p.m. that ‘enforcement was impossible,’” the Observer quoted then-City Manager John Jalili, who reported this to the city council shortly after the 1986 festivities.

The story went on to note that during peak hours the stretched thin, police force, gave up trying to handle misdemeanor crimes, such as burglaries and fights, in order to attend to the more-dangerous felonies.

“We’re a city of 90,000 people with 200 police officers playing host to half a million people with poor behavior,” the Observor quoted then-Mayor Christine Reed as saying in August of 1986, regarding her support of banning the July Fourth fireworks display at the pier. At the time, the police chief, city manager, mayor, and fire chief all supported abandoning the fireworks show.

Instead of banning fireworks all together, Santa Monica tried something else first. They moved the show to early in the morning, with the fireworks display shooting off at sunrise. It was called, “Dawn’s Early Light.”

“Really what moving it to the early morning created was the problem of people staying over night,” notes pier historian Jim Harris. “By 1991, the violence hadn’t subsided. People were just staying over night and the crowds were now an over-night problem, not a just night-of problem.”

Another report, from the Daily Breeze in 1991, chronicled two early morning shootings, and as many as 20 stabbings. “Many youths who came to see the fireworks said they were afraid to go onto the pier because of gang threats,” notes the July 5, 1991 article. That was the last year of the morning show.

Since then, Santa Monica has rarely had firework shows. The last time they were seen on the pier was for the City’s Bicentennial Celebration.

For now, all Santa Monica has to celebrate America’s Independence is the community college’s “Celebrate America” annual fireworks show, but it was more than a week before the Fourth of July this year. This year as many as 5,000 or 6,000 people, mostly locals, attended at Corsair Field.

For the afternoon of the Fourth of July, the closest thing to a City celebration is the Main Street parade in the morning. It is a blooming tradition worth attending, but hardly a community-wide event.

“I’ve had people complain to me that we don’t have more stuff on the fourth,” said Santa Monica City Council member Bob Holbrook, who said he sympathizes and wishes there was still a giant celebration. “But when I remember the huge crowds, it was impossible to get anywhere.”