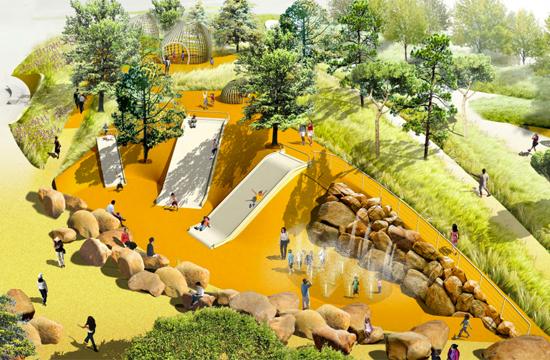 Palisades Garden Walk (PGW) and a redesigned Civic Auditorium are one step closer to realization, as the Santa Monica City Council unanimously approved negotiations of the two design plans for a combined worth of about $74 million to move forward at its June 26 meeting at City Hall.

W.E. O’Neil Construction Company will negotiate with City Manager Rod Gould for a $39 million phased contract for pre-construction and construction services of PGW, while Morley Builders will seek an estimated $35 million deal for the design-build contract for the Civic Auditorium redesign and seismic upgrade.

“W.E. O’Neil has extensive experience in large construction projects and has background working with various public agencies throughout Southern California,” said Public Works Director Martin Pastucha. “The design service for this (project) is going to be a continuation of the James Corner Operations Group, in which they will … assume the balance of the contract when James Corner Field Operations complete design services and enter construction activities.”

In his staff report, Pastucha further elaborated on why W.E. O’Neil was selected for the PGW project.

“W.E. O’Neil has a clear understanding of the project, a good track record of projects of a similar size and scope, the most competitive bid and excellent references,” he wrote. “Projects completed by W.E. O’Neil include upgrades to Santa Monica Parking Structures 7 and 8, Cal Poly Pomona Residential Suites, … and the West Hollywood Library.”

Similarly, Pastucha wrote in his staff report for the Civic Auditorium project that Morley Builders and its associated partners were ideal for the venue’s redesign and seismic upgrade.

Among those working with Morley Builders on the Civic Auditorium project included its design-build architectural partner, Levin and Associates Architects, as well as “an associated team of consultants in the fields of theater, acoustics, audio/video and lighting design area.”

Pastucha said City officials would make every effort in the negotiation process to ensure as many local skilled and non-skilled laborers would be involved with the pre-construction and construction services of both projects at the contractor and sub-contractor level.

“That is certainly something we can enter into. It’s certainly part of the process of going through and asking that they look at a local hiring program,” Pastucha told council members.

Gould added that the council will be presented with a study session delving into local hiring programs at its July 26 meeting.

According to Pastucha, W.E. O’Neil would overlook the project as the construction manager, with various subcontractors added to throughout the course of the development. The same contractor-subcontractor setup would exist in the Civic Auditorium project, as well.

Pastucha also predicted final design plans may be submitted to the council, probably by the fall, though construction may not start until late Spring 2012, at the earliest. Construction is estimated to take about a year to complete.

W.E. O’Neil was chosen among four contractors competing for the PGW project, while Morley Builders was the chosen candidate among 17 proposals.

In addition to allocating $39 million for the PGW design-build contract, Pastucha added staff will return to council with “ requests for authorization for additional third party contracts (for) … inspection and testing services and construction management services, in an amount not to exceed $7,000,000.”

Similarly, staff will also approach council members with requests for third party contracts worth as much as $11,800,000 for inspection and testing services and construction management services for the $35 million Civic Auditorium project.

Council members Bobby Shriver and Kevin McKeown were not present at the June 26 meeting.