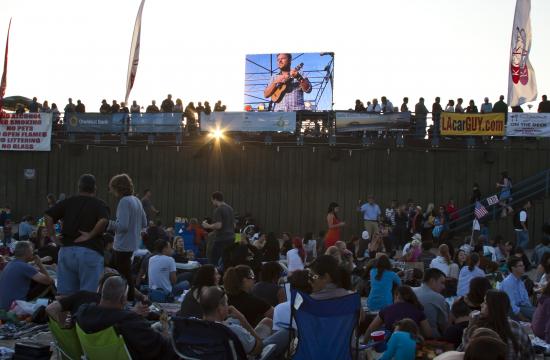 With the clock ticking, the Pier Restoration Corporation (PRC) has accomplished what many thought was nearly impossible. Craig Hoffman, of the PRC, announced that the organization secured a large replacement screen in the nick of time so that beach goers of the Twilight Dance Series will be able to watch the performances happening above on the Santa Monica Pier.

“We pulled together all of our resources from the community and called all of our business partners,” Hoffman said. “It all came together in the end.”

The artists to play at tonight’s Twilight Dance Series, which is this year’s fourth in the 10-week line up, are slated as Reggae/Ska bands and set to start at 7 p.m. and go until 10 p.m.

Until this afternoon, it looked as though those bands (which includes the Slackers, Starpool, Olio, The Bad Bad Things, and Down Home) would perform without a large screen LED screen. The budget was originally only large enough for big screen and crews to film the first three concert series. But that didn’t stop Hoffman from doing everything he could to finding donors.

The new screen may not have the opulence of the larger LED screen, but it is still a sizable screen with a professional crew of videographers to project the rock show live from onstage for those on the beach below to see.

“The screen is going to be in the exact same place as the LED screen (on the south side of the pier),” Hoffman said.

Artisan Design donated the screen for tonight’s fourth concert series. Rob Wyatt, principal designer and founder of Artisan Design, donated the eight-by-eight foot rear projection screen at the last minute to the relief of much of the Pier Restoration Corporation staff who had been scrambling.

“No other sponsors have stepped forward to fund the LED screen in August,” Hoffman said. “But we will take it week by week. If this alternate screen works out well then we will probably be using it until September when we get the LED screen back.”

It wasn’t only Wyatt who stepped up for Santa Monica, but also Pablo Garrahan of WSR Creative, a full service production and post-production company that creates all kinds of commercials, films, and videos.

“They donated their services tonight and all the equipment,” Hoffman said. “They are our production partner and they came through for us. They produce our content for the screen and add insertions.”

Hoffman and the staff at the Pier Restoration Corporation will be able to enjoy tonight’s concert knowing they worked hard to enhance the concert experience of those that sit on the beach instead of watching the show on the pier. But tomorrow, they will likely start the same process over for next week’s Thursday night concert.