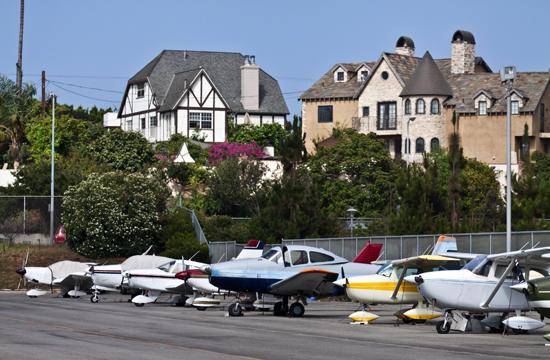 A local state senator has called for an investigation of lead-blood levels and air pollution at Santa Monica Airport (SMO) in light of a study, partially funded by the United States Environmental Protection Agency (EPA), which indicates “children who live within 500 meters of airports have significantly higher levels of lead in their blood.”

“Multiple studies have shown that residents near SMO ¬– many of whom live in the Senate district I represent – ingest significantly higher levels of suspended particulate lead and ultra-fine particulate matter,” Lieu wrote in his letter. “I have visited many of these homes and I believe the soil is also contaminated with lead and other toxic particulate matter.”

Lieu based the comments and observations in his letter on a study released on July 13 entitled “A Geospatial Analysis of the Effects of Aviation Gasoline on Childhood Blood Lead Levels.” The study concluded children living within 1,000 meters of an airport observed in North Carolina,

“where aviation gasoline is used may have a significant effect on blood lead levels in children.”

The report adds, “The impacts of aviation gasoline are highest among those children living closest to the airport.”

Lieu added SMO “is a general aviation airport with many small aircraft with piston engines that use aviation gasoline rather than jet fuel” and has children living a lot closer than 1,000 meters to the airport.

“At SMO, children live far closer to the airport, within 500 feet, not 500 meters,” Lieu said, also citing a 2011 South Coast Air Quality Management District (SCAQMD) report and a 2009 joint study conducted by UCLA and USC. “No airport in the United States has residents who live as close to an airport as at SMO. Some residents live less than 300 feet away, and the exhaust from aircraft blows into their homes on a daily basis… I believe an investigation by DTSC will reveal high levels of lead exposure and blood lead in children, as well as adults, living near SMO.”

SMO Administrator Rod Merl said the airport supports as many scientifically published reports as possible in order to help the facility better operate, though he added any determination of the transportation hub’s future is a matter of public policy.

“As Sen. Lieu points out in his letter, according to the Centers for Disease Control and Prevention, there is no safe level for lead in the blood of children,” Rubin told the Mirror in an email. “The practice flights from SMO’s flight schools repetitiously traveling the same path over Venice, Mar Vista, and West Los Angeles are a particular concern for children living under and around the flight path. This study is another reason why it makes sense to close SMO.”

Rubin was not the only one calling for the closure of SMO. For Lieu, the sheer fact that several studies have been conducted about environmental conditions at SMO is a red flag worthy of a governmental investigation.

“The consistency of the multiple studies conducted at SMO, as well as at other general aviation airports, show that residents living near SMO are living in a toxic atmosphere,” Lieu wrote. “I believe these studies provide more than enough basis for DTSC to conduct a formal investigation into the toxicity of the soil, vapor, and air surrounding SMO.”

Accordingly, Lieu hoped a formal DTSC investigation would potentially result in the ceasing of operations at SMO.

“DTSC’s expertise will be especially critical given the fact that the lease between the Federal government and (the City of) Santa Monica for airport operations at SMO expires in 2015,” Lieu wrote. “The results of DTSC’s investigation will be useful in determining what mitigation measures are necessary at SMO, and whether SMO should even continue operating as an airport past 2015.”

Stating pollution emanating from SMO is regularly overlooked both by City and federal government officials, Rubin said there are better uses for the airport land.

“I strongly believe that the land that is now SMO can, should, and must, be used in a smart, environmentally sensitive way that will be much more beneficial to the area, and that means no more airport,” Rubin said, adding the absence of planes taking off from Santa Monica “would be like a reduction of smoking five packs of cigarettes to two packs a day.”

SMO has long been subject to debate at all levels of government. Just three months ago, Congressional Rep. Henry Waxman, whose 30th congressional district includes Santa Monica and West Los Angeles, managed to include an amendment to the FAA Reauthorization Bill of 2011 to address the lack of runway safety at SMO.

A few days later, the Los Angeles City Council reportedly passed a resolution announcing its intent to support specific legislation that would permanently establish a new flight plan at SMO, taking planes directly over Santa Monica homes while also shutting down the six flight schools operating at the airport.