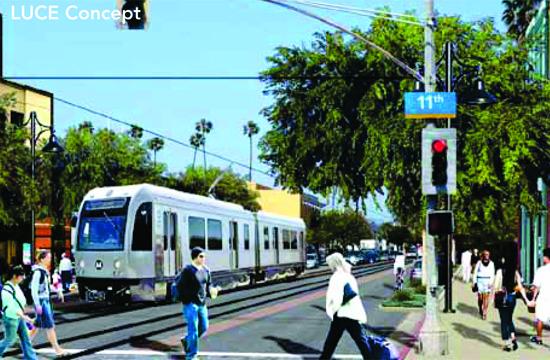 The City of Santa Monica continues to plan upgrades throughout the municipality, and while much attention is given to Development Agreements (DA) and glitzier multi-million dollar projects such as Palisades Garden Walk (PGW) and the Exposition Light Rail, some streetscape improvements are also the works. One of those streetscape improvements will be taking place on Cloverfield Boulevard and 20th Street, where the City plans to upgrade the “pedestrian experience” at both locations by winter 2012.

Both streetscape projects are expected to maintain the vision of the Land Use and Circulation Element (LUCE). As part of the streetscape improvements on both Cloverfield Boulevard and 20th Street, the upgraded pedestrian experience includes improved pedestrian amenities; relief in the form of trees or plantings; enhanced sidewalks; and, transit amenities.

According to a City-issued presentation on Santa Monica’s boulevards, the streetscape projects would ultimately “enhance the streetscape environment to create an inviting pedestrian experience with bus shelters, open plazas, bike parking, and street level activity.”

That same presentation said the LUCE will help Santa Monica’s streets maintain a healthy balance between automotive and pedestrian traffic.

“The LUCE’s vision is to reconfigure the boulevards from automobile-oriented retail to a mix of residential, pedestrian and neighborhood-serving uses in order to achieve an active social environment within a revitalized streetscape,” the presentation pointed out.

“The replacement of character defining streetscape elements, such as street lamps, should respect the existing character of the boulevard to the greatest extent feasible, and be completed in accordance with City policy,” wrote Mark Cuneo, an engineer with the City‘s Public Works Department, in a staff report to Santa Monica City Council members of the proposed streetscape projects in 2007.

Accordingly, a key goal for the respective streetscape projects for Cloverfield Boulevard and 20th Street is to create a comfortable pedestrian environment.

Another key attribute of the streetscape upgrades on Cloverfield Boulvard and 20th Street will be specially marked bike lanes allowing for bicycles and automobiles to better share the road together.

Finally, more litter receptacles will be added along both streets.

According to City staff, design firm Ahbe Landscape Architects would work on the streetscape improvements on Cloverfield Boulevard and 20th Street.

Council members and local residents provided the design firm with input in March.