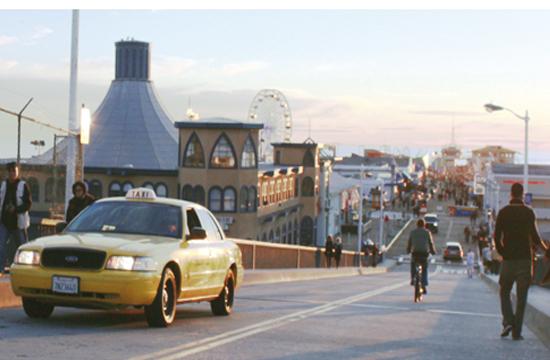 July 1 is not just the official start date of the second half of the year; it is also the first day anyone can travel from Santa Monica to Los Angeles International Airport (LAX) and pay no more than $35, thanks to a Santa Monica City Council vote dropping taxicab rates to the transportation hub.

The provision was adopted as part of an extensive discussion on two matters relating to the citywide taxi franchise system considered by council members at City Hall on June 28. The other matter considered by the council was a credit to taxicab franchises for fees paid to the City to have “exclusive access to the Santa Monica market.”

Under the new provision, those within city limits hailing taxicabs north of Interstate 10 and traveling to LAX will pay a maximum rate of $35 one-way; conversely, those within city limits flagging down taxis south of Interstate 10 will be capped at a $30 one-way rate. Council and staff had previously discussed rates as high as $45 for a one-way trip from Santa Monica to LAX.

“The original idea for the maximum flat rate came from council,” said Salvador Valles, the City‘s Taxi Franchise Program coordinator. “(Based on) my conversation with the taxicab companies, I think there is disagreement amongst themselves … on that issue.”

Council member Bob Holbrook said at least one taxicab operator contacted him in favor of instituting flat rates of $35 and $30, respectively, for commuters north and south of Interstate 10, without the “maximum” component. (Under a “maximum flat rate,” a taxicab company can charge up to a certain rate, but a rate may be slightly lower based upon point of origin and distance traveled).

“I received a memo from one taxicab company that thought there shouldn’t be a maximum, just simply a flat rate,” Council member Bob Holbrook said.

However, allowing the rate to be “maximum flat” would allow taxicabs to offer discounts and give consumers an opportunity to shop around, since cabbies are not locked into charging one absolute price.

“The consumer does have the option to pay a lower rate (under the maximum flat rate plan),” Valles observed.

Several taxicab representatives battled through an arduous council agenda in order to speak on the last substantive matter on the evening’s docket.

The consensus among the taxicab company representatives seemed to be in favor of a two-rate fee system throughout Santa Monica with Interstate 10 serving as the dividing line bifurcating the charged amounts. Taxicab company representatives also asked council members to take away the option of running the meter and the opportunity to offer customers discounts and coupons.

“I’m objecting to the matter of having one maximum rate. The word ‘maximum’ is almost confusing for the driver (and) for the passenger. It’s not clear the driver should run the meter or not,” said Kia Tehrani, director of operations of Los Angeles Yellow Cab. “Flat rate should be for south of the 10 freeway and north of the 10 freeway.”

The council ultimately decided on the two rates, which was slightly different than what staff had recommended; both in the staff report and in Valles’ presentation, it was recommended council approve a single $35 maximum rate.

City Hall has control over cabbies because of a franchise system instituted in 2010, which put strong restrictions on the number of cab companies allowed to operate in city limits, and capped the maximum number of cabs at 300. The vote was spawned from a taxicab franchise program that was scheduled to take effect on Jan. 1. Under the program, five taxicab franchises were to be provided with “exclusive access to the Santa Monica market.”

However, on Dec. 23, 2010, almost one week before the program was to go into effect, various non-franchised taxicab companies filed a lawsuit seeking a temporary restraining order (TRO) and injunction against implementation of the program. The TRO was granted, but the injunction was ultimately denied and the program was allowed to move forward. The taxicab franchise program was officially implemented on March 1.

Accordingly, “franchisees have requested that fees be prorated to account for the shortened permit/franchise year,” giving rise to the issue ultimately being presented in front of council this week.

“Each franchisee experienced disparate impact, depending on whether a company experienced a decrease or increase in the number of vehicles operating in the city as a result of being granted a franchise,” Valles said in his staff report. “This allowed some companies to maintain fleet sizes that were larger than the fleet size authorized under their respective franchises, and in other cases, it denied the company full access to the taxicab market in accordance with their franchise agreement for the two-month delay.”