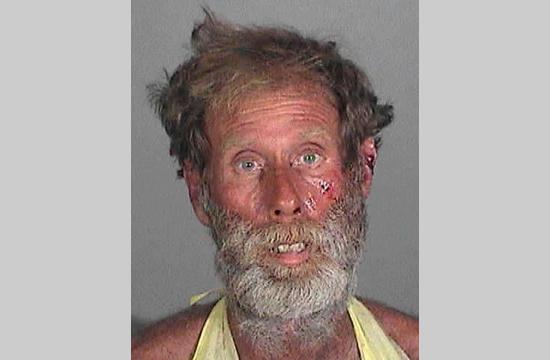 A homeless man attempted to steal a baby from a stroller, choke it, and then attacked the child’s grandmother in Santa Monica on July 11 until a Good Samaritan intervened. Police arrived, but also had to fight the crazed attacker. It took three Santa Monica Police Department officers to take down and arrest, 51 year-old Lewis Clair Moss, who is looking at charges of attempted murder, attempted kidnapping, child cruelty, assault, and obstructing justice by resisting arrest and causing injury to officers.

Shortly after 3:30 p.m., a Russian grandmother, who was watching her grandson while the parents were on vacation in Hawaii, walked from West Los Angeles into Santa Monica with the child in a stroller to do some shopping. The one-year-old was strapped in to the stroller.

She was heading west when Moss, a 5 foot 10 inches white male weighing about 170 pounds, approached and reached into the stroller, attempting to take the baby. When the straps prevented this, he began choking the infant, ripping its clothes off in the process.

When the grandmother intervened, the raged Moss turned his assault on to her. The two wrestled into the street, where the woman hit her head and was punched repeatedly in the face by the assailant.

It was at this time that a Hispanic man came to the rescue, attacking Moss. Despite taking multiple kicks to the face, the intervening man was able to get the grandmother and the child to the safety of a store by the time officers arrived on scene.

“Sometimes citizens do great things,” said Sgt. Richard Lewis, the public information officer for the Santa Monica Police Department. “If it wasn’t for him, (Moss) may have hurt that baby badly.”

But Moss wasn’t out of steam yet – attacking the first arriving officer. Two other officers quickly arrived on scene, one of which deployed a tazer on the transient, which did not slow his attacks on the officers. Ultimately, the three officers were able to subdue Moss and take him into custody.

The infant child suffered minor injuries to his head, neck, face, and torso. The grandmother appeared to sustain the worst injury, with a sizable bump on her head from the fall to the street. She also suffered facial injuries, as did the male citizen who intervened. All were treated by paramedics. Three officers received minor injuries as a result of taking the suspect into custody.

With the long list of charges, including attempted murder and kidnapping, Moss is being held on $500,000 bail and is looking at life in prison.