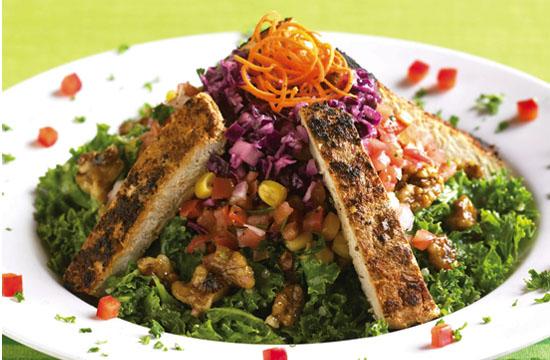 For years, the space on the north side of Wilshire Boulevard near 20th Street was occupied by a Sizzler steak restaurant. Now that space has become home to a restaurant with a different kind of steak: plant protein “veggie-steak.”

The Veggie Grill opened in the former Sizzler spot in December, the fourth branch in a growing chain of a new vegan restaurant concept. Only months after it opened, the restaurant unwittingly had a brief moment in the spotlight when its parking lot became the site of a $1.5 million jewelry heist. Notwithstanding that event, the restaurant has become a welcome new lunchtime and dinner option and seems to have found a loyal following.

“I love the Veggie Grill; I think I’ve been to all of them. I’m vegan and I find that I can bring all my non-vegan friends and they can have an amazing meal,” said San Fernando Valley resident Minoo Rahbar, who teaches children about animal issues. “I don’t even have to tell them it’s vegan food because they enjoy it. The flavors are really good; everything is really tasty. It’s one of my favorite places.”

Vegan dining is limited to only plant-based food – there’s no meat, dairy, eggs, seafood, or animal products – and the Veggie Grill’s expansion might be a sign of a growing interest in the practice. For the uninitiated, learning how to find enough variety, flavor, and nutrition in a vegan diet can be challenging. The Veggie Grill takes an accessible approach to vegan dining, in which tastiness seems to be at least as important as the health and ethical dimensions of avoiding animal products.

On the menu are vegan renditions of standard sandwiches, burgers, salads, starters, and desserts, all made with ingredients that are “nutrient-rich, 100 percent plant-based, and free of cholesterol, animal fat, and trans fat,” according to the restaurant’s website. The food is tasty and filling, thanks to plenty of seasonings and sauces.

The Veggie Grill is known for its meat substitutes – “Chillin’ Chickin’” and “Veggie-Steak”– seasoned, marinated veggie protein blends that look like meat and have a somewhat similar texture. These items are alluring to many who are easing into the vegan way and still have an appetite for meat, or for those who just want to try something different. The veggie-steak in the Chipotle BBQ Sandwich had grill marks and was pulled apart into shreds, like beef. Although it lacked the primal chewiness of beef, there was plenty of flavor and juice because it had been marinated and then adorned with a rich, creamy chipotle ranch sauce.

“I don’t exactly know what [the veggie protein blend] is. I just know it doesn’t taste like other vegetarian options out there like tofu burgers, which I don’t like. This actually has a lot of flavor; it tastes good, it tastes like real beef, I think,” said Jane Kim, who meets up with friends here for dinner every two weeks. “I think they’ve done a great job with the meat substitutes,” said Brentwood resident Gloria Spivak.

All this yumminess is enough to make one curious about the calorie and sodium count and other nutritional information of all the dishes, which would be helpful to see on the menu.

For those who don’t crave meat there are other options, including some less-processed veggie dishes and a few salads and sandwiches made with tempeh, which is a blend of soybean and rice culture. West Los Angeles veterinarian Dr. Armaiti May, who has been a vegan for 12 years and a vegetarian before that, says she favors whole foods like tempeh, grains and veggies. She likes the Lentil Soup ($4.50, on Thursdays only) and the All Hail Kale salad ($7.95) or Bali Bliss sandwich ($6.75), both made with sauteed and grilled tempeh.

Some signature dishes are the sweet potato fries ($4.25) served with chipotle ranch, the Santa Fe Crispy Chickin’ sandwich ($8.95) flavored with a southwestern spiced vegan mayo, a side of the Mac-n-Cheese ($3.50) made with quinoa pasta and vegan cheese, and the famous carrot cake ($3.50) that’s free of dairy and refined sugar. Sandwiches and burgers come with a side of red cabbage slaw or Bean Me Up Chili, and can be served on a wheat bun, wrap-style or on a bed of steamed kale instead of a bun.

A bright green and orange color palette, light wood floors, and lots of windows give Veggie Grill a clean, airy feel. Place your order and pay at the counter, get a number, and one of the orange-aproned staff will bring your order on a tray to your table. The staff is friendly and eager to answer questions about the menu. Nothing on the menu is over $10, but your bill can add up quickly if you include a drink or a side. This isn’t fast food, but a class of dining that some are calling “fast casual.”

The first Veggie Grill was started in 1996 in Irvine by two successful businessmen, former investment banker Kevin Boylan and former technology entrepreneur T.K. Pillan. They have since been refining the concept and rolling out further outposts in Los Angeles and Orange counties. Now there are seven Veggie Grill stores, including one in El Segundo, Torrance, West Hollywood, and the Fairfax farmers’ market, and more are in the works.