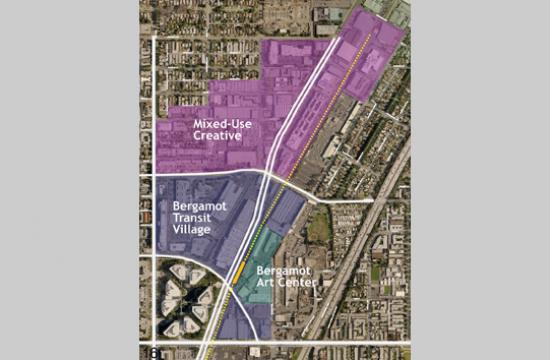 Bergamot Station will be one of three Exposition Light Rail stops in Santa Monica when the service rolls into town in 2015. Since 1994 Bergamot has been home to an arts center. A sustainable future for this arts center and ways to expand its influence to the city’s surrounding creative districts were the subject of a community workshop at Pier 59 Studios on July 13.

Bergamot is made up of 7.4 acres of which 5.6 acres are City-owned and 1.8 acres are privately owned. Today Bergamot contains 35 fine art galleries, seven creative businesses, two non-profits, and the Santa Monica Museum of Art. It is currently Southern California’s largest art gallery complex.

A presentation from Santa Monica’s planning department described the challenges in Bergamot’s future. Questions were asked of the attendees, such as, “How do we create an environment that is both supportive of the arts and of a mixed-use, transit oriented neighborhood?” Another issue is keeping rents and land values low enough to retain art galleries and other arts uses. At the same time creative districts throughout the region are competing with Bergamot Station. Lastly, Bergamot Station was conceived as a temporary use. “How can we ensure its success as a permanent and economically sustainable art center?”

Workshop participants had the opportunity to break into small groups and brainstorm on these challenges. The groups did this by suggesting uses or features that should be retained at the art center and also suggested new uses and features for either the art center or the surrounding creative districts. Their ideas were then presented to the group as a whole.

A number of themes emerged from the community particularly having “Bergamot to grow in the same character as it exists today.” Almost all the groups called for the art galleries and the Santa Monica Museum of Art to remain at Bergamot Station. Many also suggested having artist live/work studios there or in the surrounding creative arts districts. Another theme was having some type of a theater along with an educational component.

Most of the groups recommended having restaurants and outdoor cafes, more open space, and additional landscaping. Another idea was to have retail with a local emphasis rather than the national chains. Also suggested was the inclusion of some type of hotel and public art.

Providing adequate parking was a recurrent theme. Several groups suggested placing parking underground. Some suggested opening up access to Bergamot Station from all points as well as to pedestrians and cyclists.