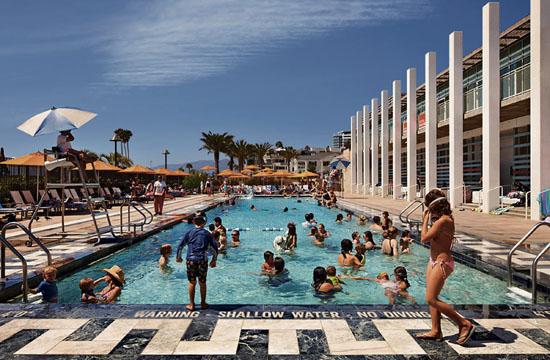 As Santa Monica embarks on a path of increased communal development projects throughout the city, one location has already been up and running for nearly 30 months now: the Annenberg Community Beach House at Santa Monica State Beach.

As a facility that is open year-round to offer the “beach club experience to the general public,” the Annenberg Community Beach House is home to many recreational activities, be it the seasonal uses of the pool and fitness center or the many events taking place there such as Disco Golf, Ladder Ball, jazz concerts, book readings, and art galleries, among others.

The tagline on the Beach House’s website says it all: “A public destination, open to all, no membership required.”

In many ways, the Annenberg House may serve as an ideal example of how millions of dollars were spent on a development project to revitalize a small slice of Santa Monica in hopes it would draw increased public participation and, ultimately, foster the building of community.

Before the end of August, adults and families alike will be able to spend quality time interacting with each other at a space once known for exclusively receiving and hosting Hollywood’s elite. On Aug. 18, for example, the Annenberg Community Beach House presents “Adult Pool Night,” which is billed as a “sunset swim” in the facility’s pool while taking in music from the Martini Kings.

Less than 10 days later, a family-themed “Get Down on the Sand” event is scheduled for the afternoon of Aug. 27.

Such community-building development projects could arguably be the very spirit of several other ventures on the City’s docket, including the Palisades Garden Walk and Town Square, Civic Auditorium improvements, the Early Childhood Education Center, Pico Area Branch Library, and the Expo Light Rail.

“The overall site plan has been designed to create a beach-oriented, public gathering place that also responds to the cultural history of the site. The location, size, massing and placement of the proposed new construction on the site have been designed to be compatible with the surrounding residential and beach-oriented uses,” Planner Roxanne Tanemori wrote in a staff report when the Annenberg Beach Community House was being considered by council.

“The proposed recreational uses and amenities on the parcel have been developed to create a stronger connection to regional open spaces such as the Santa Monica State Beach,” she added.

Yet, for more than a decade, the Annenberg Beach House was completely out of commission. Nearly destroyed by the 1994 Northridge earthquake, it took about 11 years before the facility came back into play as an operational site.

Indeed, it was in 2005 that Wallis Annenberg and the Annenberg Foundation committed about $27.5 million to revitalize the property that was developed by William Randolph Hearst in the 1920s for actress Marion Davies.

The Davies estate adorned the five-acre beachfront property with a mansion of epic proportions: more than 100 rooms, a marble pool, dual staircases featuring balustrades, and portions of actual rooms literally taken from historic structures in England, Ireland, and Italy and rebuilt here in Santa Monica.

“At the time, this stretch of beachfront property was known as the ‘Gold Coast’ because of the numerous opulent residences found there and the lavish lifestyle of their owners and their friends,” Tanemori added in her 2006 staff report. “The original estate featured a 100-room, Georgian Revival style mansion constructed in 1928, a large guest house (North House) constructed in 1929, a swimming pool, and tennis courts.”

Soon, the estate at 415 Pacific Coast Highway was transformed into a Hollywood hot spot, as some of the entertainment industry’s biggest names such as Charlie Chaplin, Greta Garbo, Louis B. Mayer, and Clark Gable trekked from Hollywood and the San Fernando Valley to be hosted by Davies and Hearst.

It was not until just after World War II, in 1947, that the Davies estate was sold and subsequently converted to a hotel and private beach club. In 1956, the main mansion was demolished, but only the private beach club remained. Three years later, the State of California purchased the property and has maintained it ever since. Through 1994, the private social establishment – known as the Sand and Sea Club – continued to operate.

Of course, the 1994 Northridge earthquake changed everything, and the State decided it was perfect timing to re-envision the property as a public cooperative space, with Sacramento joining forces with Santa Monica to create a whole new experience at 415 PCH.

It took four years for a reuse plan to be developed, but it would take another seven years for funding to finally arrive. However, when Annenberg’s foundation arrived in 2005, the light at the end of the tunnel was barely and faintly visible off in the far distance.

In June 2006, a court order was sought on behalf of residents living on PCH and near the former Davies estate to prevent conversion of the property into a public use facility. The court order and lawsuit alleged the public use development plan was in violation of the California Environmental Quality Act (CEQA) and Santa Monica Proposition S (which governed food services at the beach area). A settlement was eventually reached and by 2007 the Annenberg Beach House started to gain momentum.

In April 2009, 15 years after the property was rendered unusable by the Northridge Earthquake, the former Davies estate was back in use again, except this time no A-list personalities were descending down the California Incline to exclusively hobnob with each other at 415 PCH.

Instead, the Annenberg Beach House became a lifestyle and cultural destination open to the public. What once was a location where celebrities waded in a Venetian pool was ultimately transformed into a year-round facility where regular members of the public can participate in a wide variety of activities including art exhibitions, beach volleyball, concerts, workouts in the fitness room, and yoga. When it is in season, anyone can swim at the Beach House’s pool.

According to a statement published by the City’s Architectural Services Department, when the Annenberg Beach House was finally envisioned, the rehabilitated guest house and pool would include “a children’s play area, water play feature, picnic and garden terraces, sand paddle tennis and volleyball courts, and updates to the Beach Café.”

As no membership is required, the question is begged whether the Annenberg Community Beach House can serve as a model for the other development projects planned throughout Santa Monica through 2015.

“ACBH started with a robust community process, with targeted internal and external stakeholders giving input through the pre-design and design phases,” said Miriam Mulder, the City’s Architecture Services Manager. “We have already applied the lessons and practices of the ACBH to our projects currently underway or starting up, including Palisades Garden Walk, Pico Branch Library, and the Civic Auditorium.

“The Civic Auditorium may be the most closely related to the ACBH because of the historical significance of the building, and the traditional design-build project delivery being used,” she added.

Now owned by the State and operated by the City, the Annenberg Beach House features several key sustainable features that would serve as a baseline for future development projects in Santa Monica.