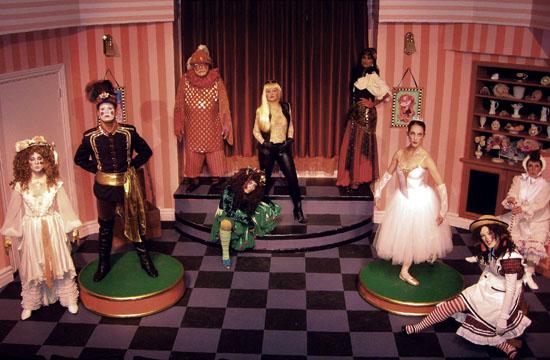 Santa Monica Playhouse continues its 50th anniversary festival with a world premiere production of a new musical, “Dolls.” Like many of the Playhouse’s Actors Repertory Theatre shows, this one was written by Playhouse co-directors Chris DeCarlo and Evelyn Rudie, with music and lyrics by Rudie and Matthew Wrather, and directed by DeCarlo.

Subtitled “Not Your Usual Love Story,” “Dolls” is a look at the experiences and thoughts of a group of dolls of varying ages and types, the former cherished toys of a girl now grown, stored in an attic. Audiences might immediately associate this premise with the film “Toy Story III”. But there’s a different resolution in the works.

In the opening number, “The Legend,” we meet the dolls — dainty Victorian doll Marguerite; Trixter, a self-described “medicine doll” who speaks in rhymes; Valentina Ballerina, who used to be part of a music-box pair (her partner broke); Lieutenant Larry, a toy soldier; Fussy Fanny, a Barbie-type fashion doll; Papusza, a gypsy fortune teller doll; Just Plain Katy, a rag doll; Babette, an antique baby doll; and Gigoletto, a marionette.

Marguerite believes in “the legend” which says that a doll that demonstrates traits of sacrifice and unconditional love will be transformed into a “real child.” She hopes this will happen to her. The others are not as concerned about becoming human; they are more upset to realize that they will not be needed by a child any more and that they will probably be carted off to the Salvation Army store. In the attic, with their ultimate fate unknown, the nine dolls act out their dreams and frustrations.

This may sound very, very cute and indeed, early on in the play, “Dolls” seems to be heading in the direction of a pseudo-Disney tale, with the cast singing and dancing to the cheerful “I Want to Laugh.” But underneath the cuteness are stories of self-realization, ambition, envy, and disappointment.

Valentina, we are told, has a broken heart, for as a music-box doll, she needs to have a partner and without one she may be wasting away. Katy, the sweet and emotionally generous rag doll, is interested in Lieutenant Larry and wants to find a way to make him loosen up. Babette encourages her while she herself tries to fend off the amorous attentions of Gigoletto.

“Then I will do the work for both of us,” replies the optimistic Gigoletto. Fussy Fanny goes through numerous costume changes, reflecting her status as a fashion doll, but admits that she doesn’t know who she really is.

Amidst the operetta-style songs and acrobatic dances, “Dolls” subtly delivers comments on social roles that humans are all too familiar with. Although the play is family-friendly, its insights into character will prove enticing to adult audiences.

The cast contains many Actors Repertory Theatre regulars such as Serena Dolinsky, wistfully sad as the obsessed Marguerite, Melissa Gentry doing a delightful turn as Fussy Fanny, and Rudie and DeCarlo as the mature lovers Babette and Gigoletto, proving that indeed no one is too old for love. Nancy Dobbs Owen, as Valentina, not only dances but possesses an excellent singing voice that received sustained applause at the opening performance.

Kudos of course to Ashley Hayes, costume designer, for helping these very human actors to look like real vintage dolls.