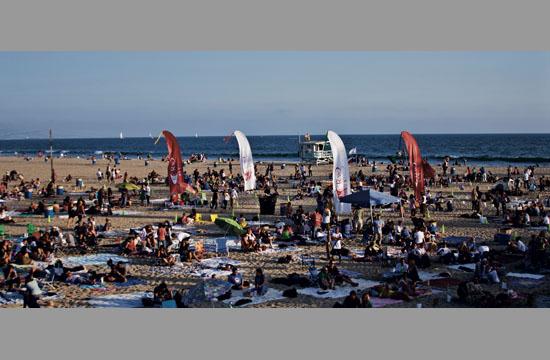 There are two crowds who attend the Twilight Dance Series, which are the free concerts held Thursday nights throughout summer. With the stage set up just east of the iconic carousel, there are those that watch the performances on the pier, overlooking the ocean. But then there is the other group of people, who sprawl out down on the beach below, with the sounds of the music above washing over them to accompany the waves of the Pacific Ocean a few yards away.

“This is what we do every summer,” Angela Aver said. Her twenty-something group calls themselves the “Mamas” who play volleyball on the south side of the pier on the beach. “We are all beach volleyball players,” Aver said. “When the concert starts we get a bunch of girls together and play doubles. We all look forward to it.”

“It’s the best night of the week,” said Leah Knight, a friend of Aver. “We rearrange our schedules to be a part of the series. It’s all about good friends, good volleyball, and good music.”

“The music gives us more energy,” said volleyball player Kelly Elton. “After, it makes you want to chill.”

Other like-minded groups can be found closer to the ocean. One cluster plays a popular beach game called “Ladder Toss.” In this game, two teams of people throw a pair of golf-ball-sized bolas connected by a thin rope in competition to see who can get the most points on a three-step ladder. The object of the game is not only to win, but to also have fun.

Most people sit and chill out in the beach area taking the opportunity to picnic with family and friends. They bring snack items such as sandwiches, pizza, doughnuts, cupcakes, and chips. Popular drinks are soda and coffee poured into plastic cups.

“I come every Thursday,” said Cynthia Bomaster, who has never missed the free weekly concerts. “It provides me with a sense of community.”

One organization of beach goers hold weekly parties around a yellow polka dot umbrella. They coordinate their beach events through Facebook, which attracts close to a hundred members each night. Events are held around the group’s symbolic umbrella, which is surrounded by plastic neon lit scepters forming a perimeter. The group has a theme for each night that is different from the weekly concert’s official themes. One was “Saints and Sinners” and this had members dress up in Halloween costumes.

“Each week we do something different and creative,” said Lance Mosley, a promoter for Yellow Polka Dot Umbrella who says his group is open to new members. “We are a social unit and we have a following of about two hundred and fifty people.”

Another group that uses Facebook to coordinate their events at the Twilight Dance Series is the One Love Parachute group. Members spread a few large parachutes on the beach and this serves as their blanket on which they place and share their tasty “parachute potluck” food items.

“This brings the community together,” said One Love Parachute spokesman Randy Todd. “Food, friends, music, community is what it’s all about. Gradually it became a thing.”

One of the particularly tasty “parachute potluck” food items is gazpacho, a cold tomato soup not dissimilar to a soupy salsa.

“Anyone is welcome to join us,” Todd said. “Just look for the Bob Marley Flag.”

The Twilight Dance Series runs from 7 p.m. to 10 p.m. each Thursday on the Santa Monica Pier.