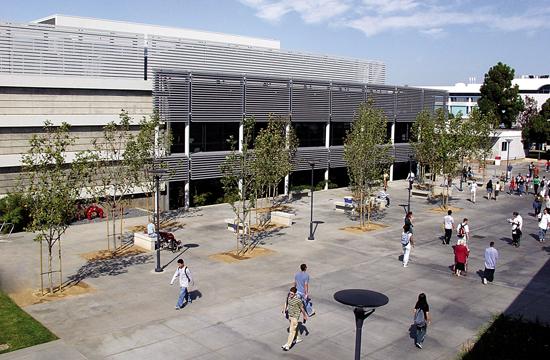 It’s back to business as usual at Santa Monica College (SMC) as police reopened the campus after a false-alarm report of a gun shots fired midday on Aug. 16. After a search of the campus found no shooter or any indication of gun fire, officers lifted the campus-wide lock down more than an hour after the initial report on the waning days of summer leading in to the beginning of fall semester.

Law enforcement officials promptly locked down the community college campus. After setting up a perimeter around SMC, more than 40 officers systemically locked the doors to all the buildings on campus, enclosing students, faculty, and staff within, while officers stood guard outside. With helicopters circling above, officers wielding assault rifles then combed the campus in search of a shooter. The epicenter of the search focused around the school’s gymnasium and the library. After an hour, SMPD allowed people out off the buildings and back onto campus.

“There is no indicate of any crime committed on the campus at this time,” said Sgt. Richard Lewis, SMPD’s public information officer. He went on to say that although they were unable to determine exactly what the girl heard, there are several sites of summer construction work on campus that she may have mistaken for gunfire. She was being questioned by investigators at the time of this report.

Because it is summer, the college currently has no classes in session, so not all SMC building are in use – those that are include sports facilities, the library, and administrative offices. But there are employees and some students on campus registering for classes, buying books. or conducting other business. Inglewood residents Erika Lopez, 25, and Wendy Romero, 20, were in the counseling office with 40-50 others when an officer with a riffle came in and told everyone to lock the door and not let anyone in or out. He waited outside, and 15 minutes later informed them of the possible shooter.

“I kept looking out the window, to see if I could see anything,” said Lopez. She said she felt safe the whole time and that the people she was locked in with remained calm throughout. “Everyone was on their phones, talking or tweeting, updating Facebook. Some were even laughing.”

Loren Marburg, an 18-year-old Hollywood resident starting classes in the fall, was in the bursar’s officer obtaining a parking pass and student I.D. when an officer calmly told everyone to exit the building.

“We made our way off campus and were waiting outside when I was told about the shooting,” said Marburg.

Neither Lopez, Romero, Marburg, nor any other person interviewed reported actually hearing gunfire. But SMPD’s Lewis said he didn’t view the false-alarm as a waste of time or resources. He said the incident gave the city’s law enforcement and emergency response units a real-life exercise. “This is something that we train for,” he said.