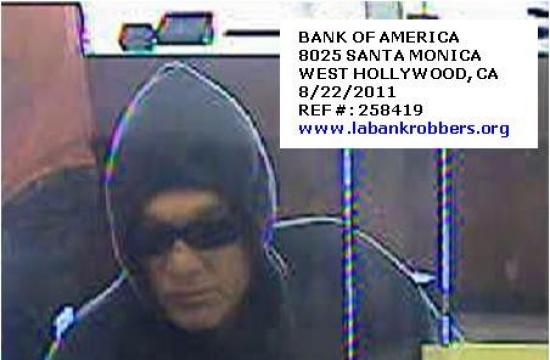 The FBI has released these photos of a bank robber who has been dubbed “The Tourist Bandit” who struck in Venice yesterday and West Hollywood on Monday.

Both bank robberies were at Bank of America branches.

A FBI spokeswoman said the suspect was described as a white male in his 40s who claimed he had a bomb and a gun. Neither was actually seen by witnesses.

In Venice, he wore a hooded sweatshirt with yellow lettering that said “Venice Beach, CA” underscored by a logo, which was unclear.

During the West Hollywood robbery, he wore a hooded sweatshirt with yellow UCLA lettering.

Additional information and photographs of bank robbers currently being sought by the FBI’s Los Angeles Field Office can be found by visiting www.labankrobbers.org.