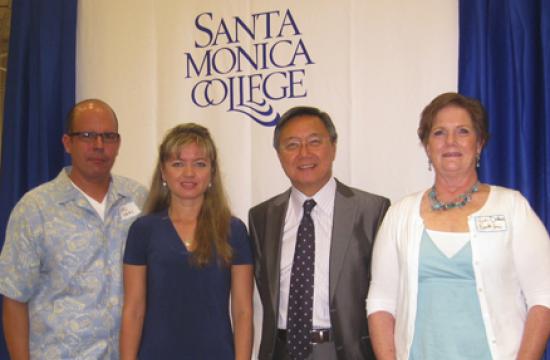 Four Santa Monica College professors were named 2011 winners of four Chairs of Excellence on Aug. 25 and will each receive $5,000 a year for each of the next three years to be used for special projects.

The Chairs of Excellence program – unusual for a community college – are administered by the SMC Foundation and are named for their primary benefactors.

Aside from music, geography, business and nursing, the other chairs are in physical science, life science, philosophy and social science, communication, visual arts, and performing arts.

“SMC is proud to offer these Chair of Excellence awards to outstanding professors who have developed projects that will enhance their teaching and enrich the academic experience for our students,” said SMC President Dr. Chui L. Tsang.

Kozlova, an accomplished pianist as well as professor, plans to use her funds to organize an annual lecture-concert series involving faculty, students and guest artists to explore the relationship between classical music and visual arts, poetry and literature. As part of that series, Kozlova says she will also conduct research, particularly on composers in Russia and Lithuania whose works are currently not in print in the United States.

Drake, chair of SMC’s Earth Science Department, plans to enlist the aid of current and former SMC Geography Information Systems students to assist in her research, which uses sophisticated geospatial technologies, on post-fire vegetation recovery in chaparral communities. “Students participating in this project will develop new marketable skills and could possibly enter the workforce as well-paid technicians/specialists. . .in environmental analysis,” Drake said in her proposal for the award.

Veas will be creating a social media marketing course and developing a long-term plan to embed social marketing into the business curriculum that will include research, student internships, guest speakers and more.

Adler will use her funds to further develop a collaboration she has started with the Nurse Advisor Project in Thailand so that nursing students at SMC and in Thailand can gain a better understanding of how culture and environment affect health in various communities. She noted in her proposal that cultural competence – a curriculum requirement by the California Board of Nursing – has become a major issue in nursing practice because of changing demographics and long-standing health care disparities in people of diverse ethnic backgrounds.