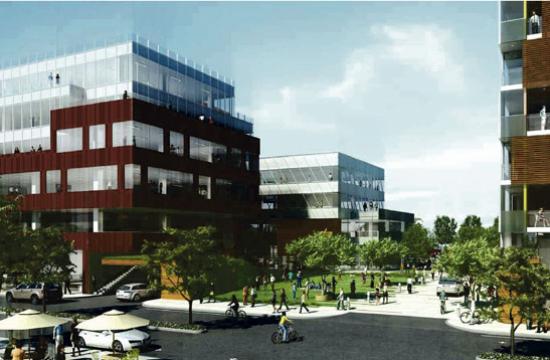 The project is not quite ready for approval, but the Santa Monica City Council believes Hines Development Company has made progress in its Development Agreement (DA) to work towards developing a mixed-use campus at the former Paper Mate site at 1681 26th Street.

While the Council’s vote at its Tuesday meeting this week was six to one to move forward with negotiations, the City is holding off on entering formal negotiations with Hines pending the results of the Draft Environmental Impact Report (DEIR), which should reveal how the proposed project would affect traffic surrounding Bergamot Village and the rest of the Westside region.

Officially presented to council members as a “float up,” a relatively new step in the DA process per the Land Use and Circulation Element (LUCE), staff was directed to continue working with the applicant in obtaining the DEIR and ultimately working toward negotiating a completed agreement.

About 60 members of the public addressed council members with mixed feelings about the project during the public hearing portion of the DA float up agenda item.

The potential of increased vehicular traffic in the area was a chief concern among those who opposed the project, while others questioned whether the project was consistent with the vision of the LUCE.

“Hines is not living up to the spirit of the LUCE,” resident Jean Laurie said, adding there was insufficient parking on-site and Hines committed only to the possibility of making future changes.

Similarly, Catherine Eldridge told council members the project was not yet ready and moving forward with the project would be immature. Further, she pointed out that according to the LUCE, multiple projects within any given region of Santa Monica must be considered as a whole instead of piecemeal. Several other DA proposals are being considered near the Bergamot Village Expo Line station, including the Lionsgate DA and the Village Trailer Park project.

Resident Valerie Griffin said the city should hold off on moving forward with Hines until the DEIR was completed.

Meanwhile, supporters believed the development would be financially beneficial to the city, potentially bringing more jobs to the city, and would foster cooperative ventures between City Hall and the private sector.

“I think a cooperative process has already begun and should continue. You don’t have to make anything adversarial,” local activist Jerry Rubin said. “It seems to be this (project) is going to be job-creating, economic-enhancing, artistic-enhancing, (and) creative space-enhancing.”

Ron Davis, chair of the Santa Monica Chamber of Commerce, said his board unanimously supported the Bergamot Transit Village project.

“This site is of critical importance to the development of the LUCE,” Davis said, adding the project’s location immediately adjacent to the first Expo Line station in Santa Monica means “it will serve as a gateway to our city.”

Hines seeks to potentially develop a 766,000 square foot creative office, neighborhood commercial, and residential project at 1681 26th Street, which is a revised version of the plan previous presented to the council on March 22.

If developed according to plan, the new campus developed by Hines would encompass five buildings.

“This project is one of the most significant land use decisions the City will make, particularly in the implementation of Bergamot Transit Village, considering the magnitude of the project, and the opportunity for influencing the entire District,” the City’s Special Projects Manager Jing Yeo stated in her staff report to council.

In March, Hines was instructed to make certain adjustments to its proposed project before the council would consider the DA. At that time, Hines presented plans to develop a nearly one million square foot project on 7.1 acres of land across the street from the future Expo Line Bergamot Village Station.

“While the project presented an exciting opportunity to implement the vision for Bergamot Transit Village, the project concepts did not comply with a number of LUCE goals and policies and were not consistent with the draft Strategies for Creating a Village,” Yeo added.

Among the issues the council hoped Hines would address after the March 22 council meeting were: the inclusion of street parking along the property’s eastern road; improvements of the parking structure entrance on Olympic Boulevard; and the widening of the sidewalk along the property’s western road.

“We’ll work with staff and we’ll comply to these issues to the extent it’s determined that we should. We intend to be fully compliant,” the representative from Hines told council members. “We’re trying to make sure that this is a very transit-oriented development.”

Similarly, the allocation of residential units was decreased from 344 to 325.

“By moving forward tonight, you are by no means approving this final project,” the Hines representative added. “We still have to go through the EIR, come back, and come up to (the council) for approval in light of that EIR.”

For the most part, council members acknowledged Hines had substantively upgraded its development plans since it last appeared in front of them in March. Certain reservations still abound, yet council members seemed willing to take one step closer to realizing the Bergamot Transit Village project even though they did not formally adopt the project on Tuesday night.

“This is a serious improvement. The streets are being used better,” Council member Terry O’Day said. “I’d like to see better functioning space. The part that I have the strongest concern about is the office versus residential ratio. I am disappointed in this version … that we did not get additional residential out of this.”

Council member Pam O’Connor said the DA is still a work in progress and a final decision was not yet being reached on the dais.

“I think we should let them move ahead,” she said. “This is not an approval by far, but it’s moving in a direction that we can take a step and say ‘let’s keep it going, let’s get that next level of information, let’s get that EIR.’ This is the new way of development review under the LUCE. It’s democracy. ”

The sole council member voting against the motion to continue working with Hines as it molds its DA was Kevin McKeown, who was concerned a decision would be reached on Tuesday evening without having all the facts about the project made available.

“This has to do whether we’re willing to make decisions without having the facts,” he said, adding that unknown traffic impacts, potential insight from the area master plan, the lack of a financial analysis, and fully fleshed out community benefits are all necessary pieces of information before the council could responsibly determine moving forward with any project, Hines or otherwise.

Now zoned for mixed-use development, the 7.1-acre site at the southeast end of Santa Monica was purchased by Hines, a Texas-based developer, shortly after Paper Mate moved to a suburb just outside Phoenix, Ariz. According to reports, Hines purchased the property for about $73 million.

If Hines does ultimately develop the Bergamot Transit Village project, it would be one of the largest development projects ever within Santa Monica. It would set the tone for its grand vision for the city’s redevelopment as outlined in the LUCE, an instrumental agenda in guiding developments of how to design projects to meet the City’s aesthetic demands while also balancing environmental concerns and cutting down on traffic.

While the DA was not formally approved, the Council’s decision on Tuesday night allows staff to continue working with Hines in refining the project. In addition to the completion of the DEIR, a series of community workshops will be held. Similarly, the city’s various boards and commission will provide additional input.