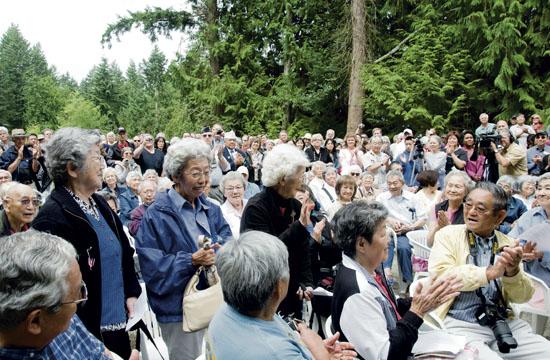 An hour in a day, dedicated to celebrating a story that started during WWII, healing old wounds and honoring an honorable community. In 1942 Bainbridge Island, Washington, had a population of fewer than 3000 people. Almost one third of the population, 276 to be exact, were Americans of Japanese decent.

These 276 people were farmers, business people, neighbors, and friends. They were grandparents, fathers and mothers, children, and babies. Their lives changed forever on March 23, 1942 when Civilian Exclusion Order #1, issued by the Western Defense Command, required all Bainbridge Islanders of Japanese decent to be sent to Manzanar Relocation Camp. They were given six days to be ready to leave.

On March 30, 1942 the Bainbridge Island Japanese-Americans were required by law to get on the ferry at Eagledale Harbor for their connection to the train and then the bus that would take them to Manzanar in California.

Today, at Pritchard Park on Eagledale Harbor, the site where the Japanese-American Bainbridge Islanders were forced to leave the island, there is a Memorial Wall and Garden and it is now a National Historic Site. The park and the memorial are the work of many local citizens, supported by grants from the state, by public grants, and by several thousand private donations.

More than 500 members of the local community came together on August 6, 2011 to celebrate the dedication of the memorial and to honor the Japanese-American Bainbridge Islanders. Clarence Moriwaki, a Board Member of the Bainbridge Island Japanese-American Exclusion Memorial Association, welcomed people and explained the Memorial Association’s motto, “Nidoto Nai Yoni.” “Let It Not Happen Again.”

The day was sunny, skies were clear, and there was a slight breeze. On the front of the podium was the Pledge of Allegiance. Behind the speakers’ platform were the tall firs of the North West Cloud Forest. The speakers could see out, over the assembled crowd to the path to the ferry walked by the internees under the guard of armed soldiers, so many years ago.

Dr. Frank Kitamoto, a Board Member of the Bainbridge Island Japanese-American Exclusion Memorial Association, also a member of the 1941 graduating class of Bainbridge High School, shared his memories of that time. “We sold our family farm for $1.00 to friends and when, after the war, we were allowed to return, they sold it back to us for $1.00. With the help of our friends and neighbors we were able to return to the farm and the life that my family had worked so hard to create. We appreciate you. We appreciate a government that works to right a grave wrong. How special is a government that makes restitution for its mistakes.”

On the makeshift dais with Frank Kitamoto was Earl Hanson, also in the class of ’41. He had come to Eagledale Harbor that long ago day to say good-bye to his best friend. But the soldiers wouldn’t allow it. He remembered the soldiers, with bayonets fixed to their rifles, making him and all the Islanders who had come to say goodbye, stand far away from their departing friends. Mr. Hanson served in the military and told of returning home after the war’s end, of his joy at knowing that his best friend had also returned, and of being together again.

The Review, the local Bainbridge paper, an award winning local paper, was renowned and sometimes reviled, for the editorials they published opposing President Roosevelt’s Executive Order 9066, the order that was the basis for the expulsion of the 120,000 Japanese-Americans who were sent to relocation camps. The Bainbridge Island Japanese-Americans were both the first to be sent to the camps and the last to return home.

Milly and Walt Woodward, owners and editors of The Review, wrote, after the bombing of Pearl Harbor, “There is the danger of a blind, wild hysterical hatred of all persons who can trace ancestry to Japan. That some of those persons happen to be American citizens, happen to be loyal to this country and happen to have no longer a binding tie with the fatherland, are factors which easily could be swept aside by mob hysteria.” The Review, December 8, 1941.

Mary Woodward, daughter of Milly and Walt Woodward, spoke eloquently of her parents, saying, “The beauty of what my parents did was to create an opportunity for dialogue and an atmosphere was created where reasonable people were given an opportunity to be reasonable.”

Islanders were more than reasonable as known through the stories told that day, of farmers taking care of the farms of others until they could return, of business owners doing the same for their neighbors, of the high school coach who, with one game scheduled during those frightening six days, benched team mates so that all the Japanese-American boys could play the entire last game, and of the empty chairs at the 1942 Bainbridge High School graduation, each one a tribute to a missing student.

Marion Konishi graduated from high school in a relocation camp. She was the class valedictorian. In her speech she said: “Sometimes America failed and suffered…Sometimes she made mistakes, great mistakes…Her history is full of errors, but with each mistake she has learned…. Can we, the graduating class of Amache Senior High School, believe that America still means freedom, equality, security, and justice? Do I believe this? Do my classmates believe this? Yes, with all our hearts, because in that faith…in that hope…is my future, and the world’s future.”