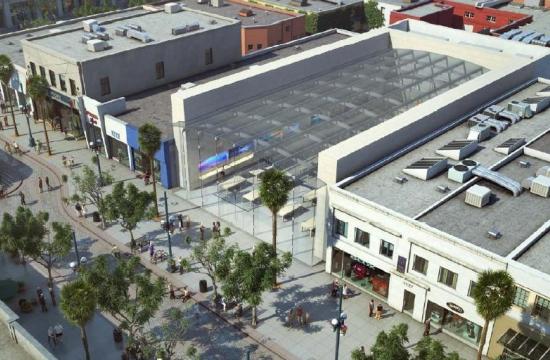 A lot of buzz is around Santa Monica that a development proposal presented last week with the City’s Planning Department could be a new Apple store inked for Third Street Promenade.

The rumors have not been confirmed by Apple, but renderings made available on Wednesday as part of the proposal are high-tech and architecturally stunning, which is what Apple stores are so well known for.

The proposed site is at 1415 Third Street Promenade, which is currently occupied by a vacant three-story commercial building built in 1984 that used to be the Borders Books and Music.

While the applicant on the report is listed as ASB/Blatteis Promenade Holdings, it is common for Apple to try and conceal its retail plans before a store is announced.

The report currently proposes the demolition of the current building to make way for a one-story, 34-foot high store that’s front facade would consist entirely of transparent glass panels. It would project five feet from stone paneled side walls.

The store would also feature a transparent glass ceiling, as seen in the renderings pictured above.

A 5,210 square foot basement would be built and be accessible from the interior of the building.

There is currently an Apple store located at 1248 Third Street Promenade.