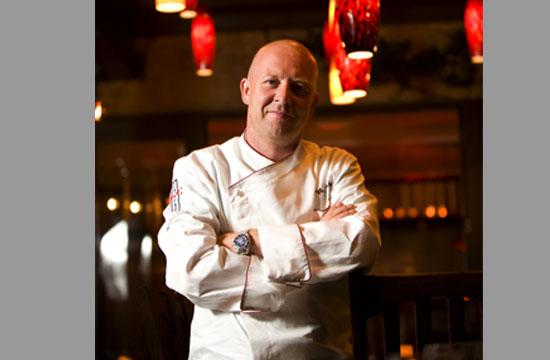 Certified master chef/owner of Stefan’s L.A. Farm, Stefan Richter, was born in Finland to a Czech-German father and a Finnish mother. He lived most of his youth in Germany where he began his formal culinary training at the Hotel and Culinary School in Immenstadt and Bad Woerischofen, Germany, eventually receiving several awards as one of the outstanding young European chefs. Further training took him to Zurich, Switzerland, but he returned to Germany where he earned his Certified Master Chef diploma at Fachhochschule Würzburg-Schweinfurt.

As a young chef, Richter worked his way through kitchens in Germany, Bangkok, and Canada, finally traveling to the United States to work as sous chef at the Ritz-Carlton in Dearborn, Michigan. Subsequently he was one of a team of famous chefs selected for the opening of the Bellagio Hotel in Las Vegas.

Richter gained much recognition for his cooking style and expertise on Bravo’s “Top Chef” reality cooking show where he was runner-up after creating an assortment of stunning dishes.

After sampling a delightful array of dishes from his L.A. Farm tasting menu, The Mirror sat down with this lively, confident chef for this two-part interview.

When did you start cooking?

Richter: When I was six or seven. My mom was a chef as was most of my family, so I was caught up in the chef’s world and spent years training in all areas of the kitchen. She was in the restaurant business in Finland and Germany and my father was an architect.

What were some of your favorite childhood foods and do you incorporate any of them in your cooking?

Richter: My mom cooked easy stuff for us such as really thick Finnish pea soup. She also loved to cook fish soup, salmon, spinach, and meat loaf. I offer some very basic dishes for lunch such as meat loaf and mashed potatoes with white truffles.

How do you come up with your recipes?

Richter: You have to play. It’s like marriage. You gotta’ work on it. Seriously. I collaborate with Leo (Bongarra) who has been my Chef du Cuisine for seven years. He’s been a friend of mine for nine years and I got him when he was untainted. He was very clean and sober and very virgin and there were no bad influences in him so I could train him to my standards and now he’s adding a lot to my work. For example, I can’t be in the kitchen right now because I’m doing this interview so he’s taking care of everything and is supervising the 12 chefs we have back there. He and I write the menus together and test a new dish by running a lunch special to see how it flies.

Do you use organic products?

Richter: As much as possible I use organic produce, or at least what I believe is organic. I can buy it from a vendor who tells me it’s organic, but we don’t know for sure that they’re not spraying the fields. So, you have to trust your vendors. I go to the Santa Monica Farmer’s Market on Wednesdays and Saturdays. I’m a Santa Monica child.

Read next Friday’s edition of The Mirror for Part 2 with Chef Richter.