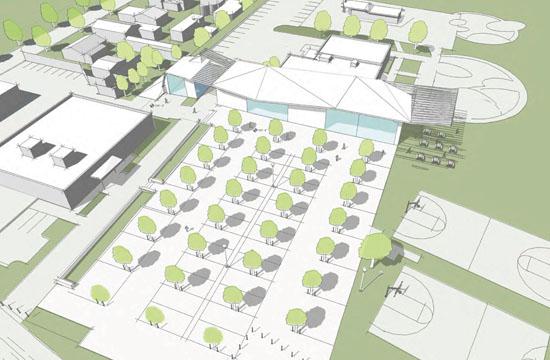 The Pico Neighborhood may again be on track to have its very own library, but it may only come to fruition if the City of Santa Monica pays a hefty “ransom” to Sacramento.

About 20 years in the making, the Pico Branch Library could start construction in mid-2012. If all goes well, it could open in 2013 as the Santa Monica Public Library’s (SMPL) fifth branch, which would be located adjacent to the Thelma Terry Community Center at Virginia Avenue Park.

Council members approved a single-story design plan submitted by Koning Eizenberg Architects on Feb. 22, but its future has been fairly uncertain up until this month.

Up until Aug. 9, a major obstacle to the new Pico Branch Library was the potential lack of funding.

There was $11.4 million allocated in Redevelopment Agency (RDA) funds for the new library, but Gov. Jerry Brown had threatened to cut state RDA funds to local municipalities in order to stabilize California’s budget. However, on Aug. 9 the RDA funds were preserved, but with some conditions.

While Brown signed one bill into law eliminating all RDAs in the state, he also moved forward a second piece of legislation that allows municipalities to maintain their RDAs “if they agree to make huge ransom payments to the state,” said Andy Agle, Santa Monica’s director of Housing and Economic Development.

Last week, Santa Monica’s council decided to make those payments. The City’s first installed “ransom” payment to the state would be $27 million; another $6.4 million would be paid annually afterward.

Tom Afschar, the library’s project manager, estimated construction would take about 19 months. He said the only formality left was to complete the design development phase

Originally, about $12.8 million in RDA funds was allocated to the library. The funding also included plans to increase parking at Virginia Avenue Park. However, it was ultimately decided that no new parking would be required and the funding allocation was adjusted accordingly to $11.4 million.

Originally part of the neighborhood’s 1983 community plan, the Pico Branch Library will be a welcome addition by some of the area’s residents, including Crystal Anderson, who commended council members for pushing forward the project during the Feb. 22 meeting.

“We are happy that finally Pico Neighborhood gets a library,” Anderson said. “It’s been several decades of asking for it. All of the other neighborhoods already have a library. If this project gets stopped, it’s again the Pico Neighborhood who loses out.”

At the Feb. 22 council meeting, Council member Kevin McKeown acknowledged the patience of residents who live in the Pico neighborhood who have wanted their own library.

“Our Pico neighborhood has waited its turn,” McKeown said. “It’s exciting to be here on the council in the moment in history when we finally get to move this forward. (The library is) meant to also attract neighborhood youth to mix education with their recreation by having a library right there in the park. It’s going to be a new and key resource in our lifelong learning community.”

However, some area residents believe taxpayers were the real losers.

“We’re opening a library that is completely useless. It’s essentially a stripped-down version of a library,” said Robert Kronovet, the chairman of Pico Improvement Organization, who spoke out as an individual, adding the library would not revitalize the Pico Neighborhood. “We’re destroying the (Saturday) farmer’s market,” he said. “We’re shoving a library into a municipal property. It’s a lousy use of taxpayer money.”

Still, that municipal property, which has a community center named after a local activist, is on the verge of having a 7,500 square foot structure serving as a local library that the Public Works Department said was “a convenient location for educational and cultural programming.”

As it stands now, the closest libraries for Pico residents are the Ocean Park or Fairview branches.

As part of the new library’s design and construction, certain aspects of Virginia Avenue Park’s surrounding area would be preserved, including green park space, recreational programs, and a farmer’s market. Additionally, the new library branch includes plans for a detached community room and a new seating area in the park. Council must first approve design schematics before construction can commence.