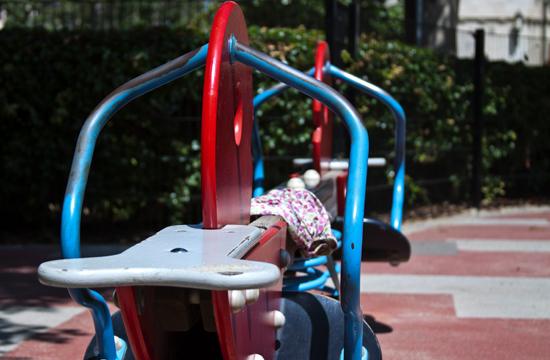 Planning for Santa Monica’s first universally accessible playground began on July 30 with an open house at the Civic Auditorium. The new playground is set to be located on Santa Monica State Beach at the site of a parking lot, Lot 5 South, near the 2900 block of Barnard Way.

A universally accessible playground is a playground where children and adults of all ages can play regardless of ability or disability. The goals and objectives of the project include making this playground an inclusive environment for all, having multi-sensory play facilities (for play that involves sounds, colors, and texture), making it memorable and iconic, safe, and sustainable. The City is working with Katherine Spitz Associates, Inc. Landscape Architecture and Planning to help develop the playground.

“We’ve been asking for (this) for a few years and we’re so pleased to see it become a reality,” said Chris Knauf, Santa Monica disabilities commissioner, after the open house. “We’re hoping this will be a show piece for the city and a model for all future playgrounds, because all playgrounds should be for all, regardless of ability or disability.”

Some of the suggestions for playground facilities included a bike path barrier; a sand play area; tiles with children’s artwork; a water table; a tire/ rubber path to the beach; a changeable case to display children’s artwork; seating for all abilities; and a recumbent stationary bike. Also suggested for inclusion were a balance surfboard, a spinning wheel, and a tube slide.

A number of playground themes were also suggested including a pier, lifeguard, under- sea, or carousel theme. Another idea was to have poles shaped like fishing poles with fish decorations.

“As a parent with a disability, I look forward to being able to play with my kids in a more interactive way,” said Amy Boesma, also a disabilities commissioner.

Boesma mentioned that her commission is working on setting up a poster contest to coincide with Disability Awareness Month in October. Children from kindergarten through twelfth grade, who attend either public or private schools, will be able to participate. The goal will be for the children to design a poster that envisions this universally accessible playground.

The details are still being worked out, but the next workshop will give the community the opportunity to give input on the preliminary design for the project. The date for this workshop has been tentatively set for Sept. 10. A third workshop will present the final design and is scheduled to be completed in the autumn.

You can give input about the playground on a survey at surveymonkey.com/s/smbuap. There is also an e-workshop for it at facebook.com/smbuap.