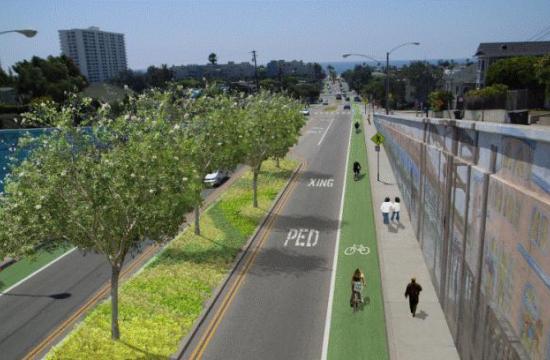 Santa Monica Council member Terry O’Day said the “Angel is in the details” when contemplating how the well-intentioned the Bike Action Plan will ultimately be executed over the course of the next five years.

Indeed, City Hall certainly hopes its ambitiously plotted strategy to get more people out of their cars and onto bicycles will angelically serve as a model for other municipalities to follow.

The City’s Bike Action Plan hopes to establish Santa Monica as a world-class bicycling community and inspire more bicycle use throughout California. Council members had their first look at the Plan as part of a study session at its Aug. 23 meeting and provided input to staff.

Ultimately, the Bike Action Plan, through joint execution with the Land Use and Circulation Element (LUCE), will help integrate bicycling into the City’s core infrastructure and, ideally, reduce the number of car trips made within Santa Monica.

Accordingly, the Plan will help achieve the LUCE’s greater vision of “no new net trips” despite new development and a growing population.

The 300-some page plan, which is available for the public to view at City Hall, has both a five-year and 20-year vision.

“The community-based vision calls for livable neighborhoods and complete streets, and a policy of No Net New Evening Peak Period Trips for automobiles,” a staff report to council members stated. “The draft Bike Action plan identifies specific ways to get more people on bikes by creating better bikeways and programs that will bring out the fun in bicycling and make bicycling convenient and comfortable.”

“It’s a thoughtful document … we can easily turn into implementation,” she told council members. “It’s getting people on bikes. All the LUCE ideas are folded into this document. It’s a policy document that helps guide decision-making of the entire city family.”

“The future is pretty clear. We can no longer depend on building our community on the remise that more vehicles are the way for more people to get around,” McKeown said. “We have to make our city more walkable and bicycleable.”

Despite the enthusiasm of council members and staff, some residents, while supportive, were a little more tempered about the execution of the Bike Action Plan.

“(The plan) goes a long way to making the city safer. It’s a well-thought out plan … but, unfortunately, it does not go far enough,” Michael Brodsky said, adding there are several quality of life issues, such as increased traffic and fossil fuels, confronting Santa Monica today and in the near future. “What is planned for five years is need now. What is planned for 20 years is necessary in five.”

Gary Cavanaugh warned against complacency, observing many cities have drafted ambitious plans to increase bicycle use yet have struggled in implementation.

With the Council’s study session complete, the plan returns to staff for revisions. Shortly thereafter, the revised plan will be considered again by the Planning Commission before heading to the council to be considered for final approval.

For additional details of the Bike Action Plan, click here.