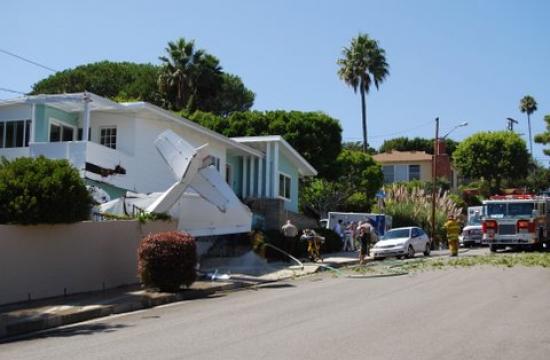 A male pilot has survived a plane crash in Santa Monica, suffering broken legs and other injuries after his single-engine Cessna crashed shortly after taking off from Santa Monica Airport.

The airplane crashed into a home at 2:29 p.m near 21st and Navy Streets.

“The pilot suffered injuries on impact, broken legs and other injuries,” Almada said. “He was pulled from the crash by workers that were painting the house that was crashed into.”

One of the painters suffered some minor cuts and bruises caused from flying debris when the plane made impact with the house, Almada said.

Santa Monica Airport Director Robert Trimborn said the pilot was the only person aboard the aircraft.

The force of the crash bent the aircraft in half and ripped the wings off the plane.

An investigation of the crash is under way. It is not immediately known what caused the plane to crash.