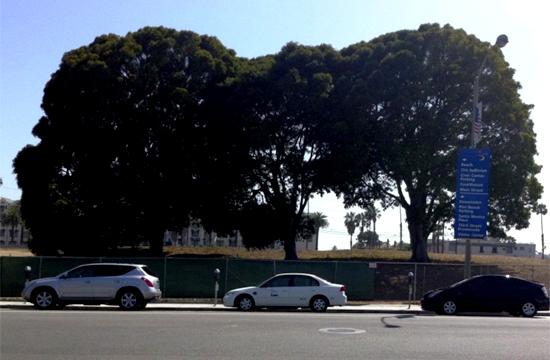 About three months from now, the trio of intertwined ficus rubinginosa trees affectionately known as “The Three Amigos” will be uprooted from their current location at the end of Olympic Drive and replanted about 550 feet away to make way for a road extension of Olympic Drive between Main Street and Ocean Avenue. The spot where the trees will be relocated will later become the much ballyhooed Palisades Garden Walk.

These are not just any three ficus trees; in the hearts of many Santa Monica residents the “Three Amigos” mean as much to Santa Monica as its beaches. Interestingly enough, when the trees came into being, and how the moniker “Three Amigos” stuck, remain a mystery to some.

The relocation is expected to be completed in November and is already underway, what with City officials commencing the first phase of the site preparation work about two weeks ago. Once the “Three Amigos” relocation is complete, work is expected to begin on The Village, an affordable housing project adjacent to the park site.

According to City staff, the trio of trees will be moved to their new location in two separate phases.

Each of the three trees will be root pruned and then boxed in the first phase. During this initial stage, the “Three Amigos” will remain in its boxed state for about 60 days so that the roots can adjust and allow the initial shock of being taken out of the ground to wear off.

The second phase will witness each tree being lifted via a pneumatic system from the spot that the “Three Amigos” once called home, onto a truck bed and be transported 550 feet away to their new location, where the same pneumatic lifting system will remove the trees from the truck bed and then replant them into the ground.

Of course, no one is quite sure of the exact age of the “Three Amigos,” which existed at its current spot at the current end of Olympic Drive back when the RAND Corporation owned the land.

“Based on the growth on the trees … we think the trees were first planted there when RAND Corporation was first built,” said Karen Ginsburg of the City’s Community and Cultural Affairs office. While an exact date seems rather difficult to pin down, the rough estimation provided by Ginsburg would place the birth of the “Three Amigos” around 1948 (or shortly thereafter), when the RAND Corporation arrived in Santa Monica.

Just the same, Ginsburg added no one is quite sure where the name “Three Amigos” came from.

“It was a name that just came about,” Ginsburg told the Mirror, adding the name definitely came about internally at City Hall when deciding how to best handle the three intertwined ficus trees.

She also stated the “Three Amigos” have an appraised value of $81,000; as part of the larger project to move 58 trees while excavating the site for the future Palisades Garden Walk park, Ginsburg said the City is spending about $913,000 to complete the project. The $913,000 contract is with American Landscape.

Once the “Three Amigos” trio is finally situated at its new location near another iconic Santa Monica arbor, the large Moreton Bay Fig tree known as “Morty,” Ginsburg said the area will be developed as a picnic area.

“Morty,” which is located next to the I-10 freeway, is one of 76 trees designated by the City to remain in its current location but will receive special protection and maintenance.

“A group of 20 Washingtonia robusta palm trees will be transported to Woodlawn Cemetery and planted there as Coastal Commission policy prevents the City from replanting these anywhere within the coastal zone, including the park site.”

Two other ficus trees located on the site of the future Palisades Garden Walk park “are in a serious state of decline” and “will be removed and not relocated due to their poor condition.”

Santa Monica residents can track the construction and related work via updates and photographs posted on the project’s Web site at smciviccenterparks.com