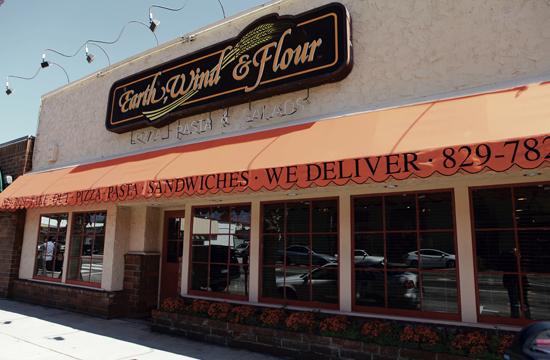 There mainstays that help define a neighborhood’s character — a bakery that serves fresh breads each day; a friendly market; or a local bar for regulars after a long work day. Earth, Wind and Flour has earned that status in Santa Monica after celebrating its 30th anniversary.

Customers frequent the restaurant each week while others make a daily trip, said owner Dennis Klempner. The casual dining experience offers familiarity and authentic Italian fare that diners rely on. Klempner has watched families come in to Earth, Wind and Flour for three decades, and he said teens who used to eat with their parents now bring in their own children after years of “feel good” atmosphere.

Klempner knows a thing or two about how to please a customer after starting in the restaurant business when he was a 14-year-old. He started in high school, washing dishes at a local Italian eatery. From there he learned the ropes, eventually moving up in ranks to executive chef and opening 14 locations with the company.

By 1971, Klempner decided to open his first restaurant, an Italian place called Pizza Peddler, in Encino. From there he stuck with the same motif of down-home Italian eats that he was raised in, making it his own. He opened Earth, Wind and Flour in 1981 finding his niche at 2222 Wilshire Boulevard in Santa Monica.

Calling himself an “understated man,” this mentality is reflected in the simple and casual dining experience at the restaurant. Sawdust is scattered on the floor and playing cards are littered on the walls from a weekly “world champion” magic act. The fresh daily ingredients and the Boston-style pizza, Klempner said, are what entice people to return.

The move to open a restaurant felt like a natural transition, instead of a life-long goal. After years in the business, he didn’t want to work for someone else, but was ready to take on the responsibility of working for himself.

“It’s almost like I didn’t think about having my own place,” Klempner said. “You work for somebody and learn your craft, and instead of me working for somebody, I work for everybody.”

Now Klempner employs about 45 employees, some of whom have been working at Earth, Wind and Flour since the beginning. He literally keeps it all in the family with both his son and daughter working at the restaurant. He wants his son to take over the business when the time comes.

After 30 years making signature pizzas and sub sandwiches, the menu has expanded from three to four salads to more than 12, and even more pasta dishes. The chefs experiment with a variety of daily specials, some so popular they become part of the permanent menu. Despite the various choices that now fill the menu, Klempner said the pizzas are still “number one.”

“We feel that customers want more variety — that’s how we are evolving — got to keep thinking about different items,” he said.