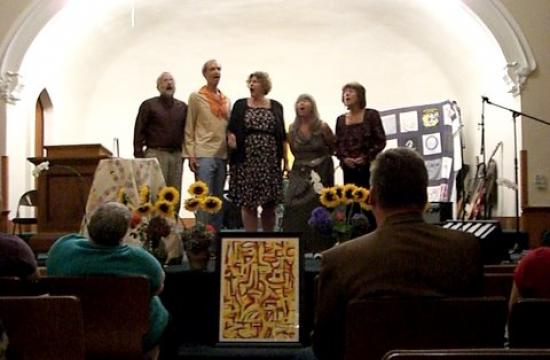 On the eve of the tenth anniversary of September 11, a more optimistic anniversary was celebrated with the 13th Annual Communitas Awards on Saturday night, given by Santa Monica’s Church in Ocean Park to individuals who have contributed to the community.

The honorees were Judy Abdo, former Mayor of Santa Monica and a longtime community activist; Reverend Sandie Richards, activist and former pastor of the Church in Ocean Park; Bill Bronner, a high-consciousness comedian and activist (and Richards’ husband); and Mike Temple, a musician and special education teacher.

Abdo was introduced by former State Senator Sheila Kuehl, a longtime friend and colleague, who explained how the young Judy Abdo made a conscious decision to become involved with the Church in Ocean Park after she accidentally found a torn flyer on the street, announcing an event at the Church.

‘From that moment of fate—after 40 years, she has taken actions that have made her not only a central and significant part of the Church but of Santa Monica, the state of California, and every person she’s touched,” said Kuehl.

Abdo’s involvements over that 40-year span have included teaching with a specialty in early childhood education; the founding of Sojourn, a center for battered women; the founding of the Ocean Park Community Organization (OPCO); work for the Pier Restoration Corporation, Santa Monicans for Renters Rights; and election to the Santa Monica City Council.

Abdo stated: “I want to say how important it is to organize the community. If we just sit back and not do anything, it will be hard. But if we work together, beautiful things can happen.”

Richards and Bronner were introduced by two young people, their son Woody Bronner, and Anna Pack. They told of how Bill Bronner, a lifelong “funny guy,” grew up in Tennessee, worked as a waiter while developing a stand-up comedy act, and began organizing his co-workers and demanding equitable treatment for all workers. He became a political comedian, with a show called “The Free Speech Show” which played at the Church in Ocean Park and enabled him to meet his future wife, Sandie Richards.

Bronner noted that he had not come to the Church with the thought of winning an award—and he felt humble compared to the achievements of Judy Abdo. “But I never felt judged here,” he added.

Richards was a self-described “troublemaker” who protested dress codes at school. Her early activism led to teaching Sunday school and then to the ministry. When she took over the ministry at the Church in Ocean Park, the building was in need of repair and the church was “fearful for its future.” But she led the church into better times. Her activism has included participating in the Living Wage campaign and working with Santa Monicans Allied for Responsible Tourism. After leaving the Church in Ocean Park ministry in 2005, she became minister at First United Methodist Church in downtown Los Angeles.

While Richards is credited with the creation of the Communitas Awards, she expressed modestly that while the awards had grown out of the “roasts” that she organized beginning with the Church’s 100th birthday in 1998, she believes that the awards really “belong to the community.”

Molly Temple introduced her father, Mike Temple. Her best memories of him included the home-cooked meals they would have after his band finished practicing, and the times he took her on road trips in his van.

“Every time I find out something about him, he becomes cooler,” she concluded.

Temple, also known as “Mike Tempo” professionally, has played drums and percussion over the years with numerous groups and artists including Burning Sensations and the Bonedaddys.

Since 1999, he has worked as a substitute teacher and eventually received teaching credentials to work as a teacher for disabled children. As a member of The Rhythmic Arts Project (TRAP) he teaches language/communication, math, and social skills to people with disabilities, through art and music.

Temple admitted that he had “lost” the words to use to express his gratitude for the award. But he noted that the Church in Ocean Park, while not traditionally “spiritual,” has given real service to society.

“I feel I am among very important people,” he said.