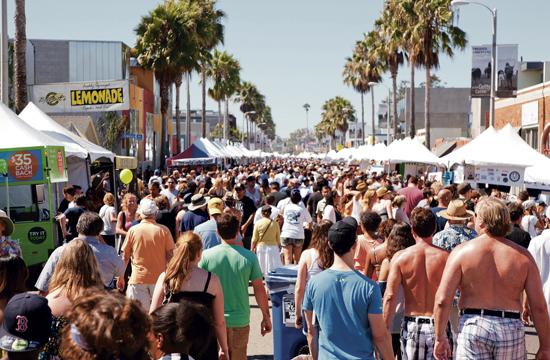 The treble and bass will certainly be reverberating throughout Venice and Santa Monica this weekend, as the 27th annual Abbot Kinney Festival arrives to town today, Sept. 25.

A free community event, the festival will feature local artisans, live music, and delightful eats, among other things.

The indie band lineup will be featured at the festival’s Andalusia Stage, while Brooks Stage will highlight live music and DJ tunes by L.A. Record and Dublab.

If the Brooks Stage was not enough, The Palms Stage at The Brig will also showcase popular DJs from Dublab.

In addition to the music, about 400 arts and crafts exhibitors will line the festival. Several food trucks will be cooking up delightful cuisine while a few beer gardens will give patrons a chance to peacefully down a drink or two.

Families with children will certainly want to take advantage of the KidsQuad, while organic and healthy food lovers may well enjoy the Whole Food Market Green Scene.

Over at the KidsQuad, in addition to face-painting, rock-climbing, Ferris Wheel-riding, and drum playing, the festival’s younger audience can enjoy some cool music on the KidsQuad Stage. Among the headlined acts include The Freeways, Mista Cookie Jar, The Shooflies, and Madame Chocolate.

Also featured is a TotLot Stage, with entertainment segments such as Brigitte Benchimdi, Valley Cut Music, and Birdie’s Playhouse keeping the little ones occupied.

While there is plenty of entertainment to go around on Sunday, a few individuals and nonprofit groups will be honored throughout the day.

Over on the Andalusia Stage, the Abbot Kinney Festival Association (AKFA) will be awarding grants to local nonprofits, including 826LA, Beyond Baroque, Inside Out Community Arts, Venice Arts, Venice Oceanarium, and A Window Between Worlds.

Later, a few individuals will be recognized as the 2011 recipients of the AKFA’s Spirit of Venice Awards. Among those to be honored include: David King, Garden Master of Venice High School Learning Garden and Founder & Chair of the Seed Library of Los Angeles (SLOLA); Venice Art Crawl co-founders Daniel Samakow, Edizen Stowell, and Mark Rojas; Yo! Venice! co-founder Bret; and, Teresa Skinner, Senior Lead Officer at the Los Angeles Police Department (LAPD).

Launched in 1984, the Abbot Kinney Festibal is organized by AKFA. The group says it is “one of the largest of its kind in the country, attracting nearly 150,000 people.”

Running from 10 a.m. to 6 a.m. on Sunday, the festival occupies a one-mile stretch of Abbot Kinney Boulevard between Main Street and Venice Boulevard.

Organizers highly recommend arriving to the festival via bike or public transportation; however, public parking lots are available on Venice Beach. Other lots are located near Windward Street, Electric Avenue, Washington Boulevard near Venice Pier, and in Marina del Rey. Parking spaces along Venice Boulevard west of Lincoln Boulevard and along Main Street.

For more information on the Abbot Kinney Festival, visit its website at www.abbotkinney.org.