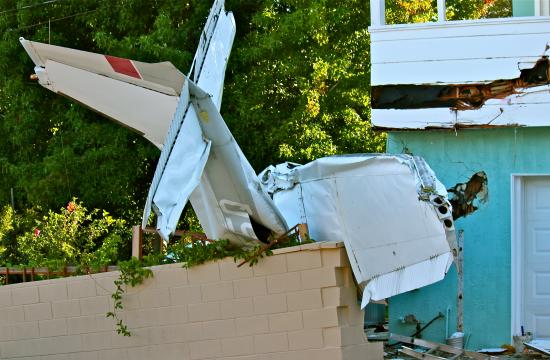 The student pilot flying the single-engine Cessna 172M that crashed into a Santa Monica home on Aug. 29 experienced an airspeed indicator failure seconds after take-off from Santa Monica Airport (SMO), according to the National Transportation Safety Board’s preliminary report.

The preliminary report said the student pilot departed SMO at about 2:23 p.m. after completing pre-takeoff checks.

Just seconds into the flight, the indicator’s needle suddenly increased, then decreased until it reached zero miles per hour.

The student pilot immediately relayed this information to a SMO air traffic controller and asked for permission to return for landing.

About one minute later the controller was able to clear the pilot to land on runway 21, from which he had just departed.

The student pilot proceeded to climb the airplane into the traffic pattern and kept the airplane close to the runway, which resulted in it being higher than normal short final approach when it crossed over the landing threshold.

When the airplane approached the last quarter of the runway, it was about 30 to 40 feet above the runway’s surface, so the pilot was directed to go around by the SMO controller.

The student pilot acknowledged the air traffic instruction, raised the wing flaps, and pushed the engine’s throttle full forward. Thereafter, the student pilot observed power lines in front of the airplane, and he maneuvered right and left to avoid them.

At 2:27 p.m., the airplane collided with a tree about 900 feet west of the departure end of runway 21. The plane traveled an additional 85 feet after initially impacting the tree top, before it crashed into a block wall of a Santa Monica home, located at 21st Street and Navy.

The student pilot, the sole occupant, was seriously injured, and two of the three painters who were working outside the home sustained minor injuries.

The airplane was registered to Planeminder LLC and operated by Justice Aviation as a planned solo flight to Santa Barbara.

Joe Justice, owner of Justice Aviation, said the student pilot had asked for anonymity, but did say he was “doing very well” and was “feeling better every day.”

Justice said the student pilot was about 15 flying hours away from becoming a private pilot, and the Aug. 29 flight was his last solo cross-country flight in his program.

Justice Aviation has about 15 aircraft in its fleet, which are used for its full service flight school, and are also available for rental.

Justice said that the 1973 Cessna 172M was among the oldest airplanes that he operates at SMO, but added the age of the aircraft had nothing to do with the fact that the airspeed indicator failed.

“An airspeed clog can happen to a brand new aircraft,” Justice told The Mirror. “The FAA requirement of a system like that is that it’s calibrated for accuracy every 24 calendar months. The last real test of that system was the day before the accident when somebody flew it and it didn’t have a problem.”

Justice said his flight school has never had a student pilot fatality.

“The neighbors should keep in mind over the last 18 years there has not been a student pilot fatality in the neighborhood of Santa Monica,” he said. “This was the very first time we came close to that.”

Justice acknowledged there were efforts by some community members to push for the closure of SMO.

He said it was unfair to “scare the public over a fear that is unwarranted, based on statistical track records.”

“People are not using logic, they are using emotion and they are basing their fears on emotion,” he said. “They are being manipulated by people who are expounding tracks that have nothing to do with the safety of the people here at Santa Monica and that’s causing a lot of emotion. If you look at the accidents logically, statistically in the past 20 to 30 years, most people in Santa Monica are far more likely to fall off a ladder and get hurt in their own backyard, than get hurt by an airplane.”

The wreckage of the Cesssa 172M has been retained by the NTSB for further examination of the airframe structure and engine.