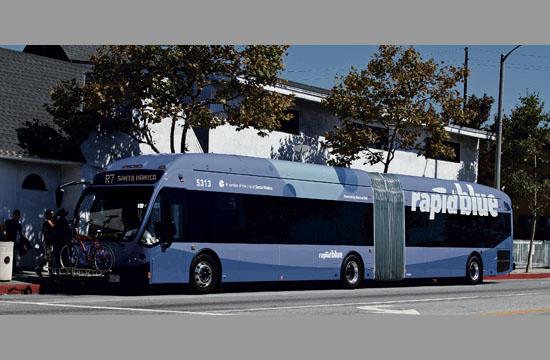 The biggest shake-up in the past decade for the Big Blue Bus (BBB) has endured some bumps since changes were made to nine of its 20 services almost two weeks ago, but the transit authority says most transition issues have already been solved or are in the process of being fixed.

BBB’s Service Improvement and Planning Committee met Tuesday afternoon to discuss the transition, which affected routes 1, 2, 6, 7, Rapid 7, 10, 11, and 12 on Aug. 28. A new service called the Downtown Ride was launched on Aug. 29.

“It was our biggest service change in about a decade, meaning that it was the most impact and the most changes to the brunt of services that we’ve undertaken in a while,” Gamberg told The Mirror. “There were some bumps in the road, partially because it was so large (a change) and we are using some new tools, new software, and added new vehicles to the fleet.”

The articulated buses for Rapid 7 were introduced to accommodate the large groups of Santa Monica College students who use public transport.

One bus user, who asked to remain anonymous, said while the longer buses were able to hold a greater number of passengers, the loading times for Rapid 7 buses during the first week were extremely long.

“On the first Tuesday afternoon of the new schedule, I was on a bus traveling eastward,” the passenger said. “It had left downtown Santa Monica at Third Street Promenade and Broadway at around 4:50 p.m. At 5 p.m., what looked to be close to a hundred students were waiting at the Pico and 18th Street SMC bus stop.”

The passenger said the load-in at this SMC stop was at least ten minutes.

“The driver refused to move forward until the standees on the bus moved all the way back, which on these new long buses, is quite a long way,” the passenger said.

Gamberg said BBB was aware there was “standing room only” on many Rapid 7 coaches during the first week of the transition, but urged passengers to remain patient.

“We’re glad that service immediately took off and that our calculations that there would be a high demand for it were accurate,” Gamberg said. “We always know the first five weeks of the beginning of the school year, particularly at SMC, is very busy. We’ll wait until the fifth or sixth week to make any set-in-stone decisions because that’s when the true ridership numbers will begin to surface.”

Gamberg said five more 60-foot CNG-powered coaches had been ordered for potential introduction in February 2012, which may be added to the Rapid Route 7 and/or Rapid Route 10, but this would only be decided after BBB analyzed the transit system following the recent changes.

Another ten 32-foot CNG-powered coaches are also set to be introduced along various other routes in February 2012, Gamberg said.

“We continuously track data such as ridership patterns, boarding numbers at different stops, ridership by time blocks, and schedule adherence on a regular basis,” she said.

“We’ll be paying even closer attention to the adjustments we made to make sure they accomplished what they were supposed to.”

Here is a breakdown of the Aug. 28 service changes:

• The changes to Routes 1 and 2 resulted in the truncation of Route 2 on Main Street at Hill Street south of that intersection. Route 1 will replace Route 2 as the primary Big Blue Bus service headed to Venice Beach and the Walgrove Avenue/Venice High School neighborhood.

• To increase passenger capacity along the transit system’s most traveled corridor, Pico Boulevard, BBB introduced 60-foot articulated buses to the Rapid 7 fleet and increased this service’s frequency and hours of operation. Rapid 7 will now operate all day from 6 a.m. through 10 p.m. on weekdays with an eight minute frequency during peak periods.

• In addition to a faster trip, Rapid 7 riders will also be able to travel farther since the service has been extended east of the Rimpau Transit Center via Crenshaw Boulevard to Metro’s Purple Line Subway Station on Wilshire Boulevard at Western Avenue. This extended service supports the City’s LUCE goal of “no net new trips” by increasing transit options between eastern Los Angeles, served by the Purple Line, to Santa Monica.

• BBB also improved regional connectivity by converting the Route 10 Freeway Express to the Rapid 10. Rapid Blue services are routes designed to connect commuter destinations that make fewer stops, thereby transporting longer distance riders from point-to- point faster. By eliminating ten of the least used stops that are within 0.25 of a mile or less from another more traveled stop, the new Rapid 10 service should experience improved travel times.

Finally, BBB introduced the new Downtown Ride service on Aug. 29. This service was designed as an incentive for drivers to use the Civic Center Structure or outdoor parking lot instead of circling around the Third Street area hunting for limited – and often pricier parking.