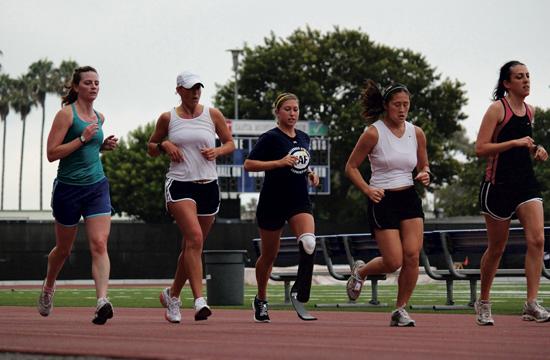 Danielle McLaughlin arrives on cue following a quest to transform her dreams into a reality.

It has become routine for her to walk past the pool, parking lot, palm trees, and onto the track of Santa Monica College to meet up with her running buddies to uphold her morning workout and a promise she made to herself.

McLaughlin wears a navy Challenged Athletes Foundation (CAF) T-shirt, black spandex, and one running shoe. As the other triathletes arrive, it is practice as usual without anybody stating the obvious.

McLaughlin matches the other athletes’ strides with her metal prosthetic “running leg.”

A few years ago, McLaughlin lost her foot to cancer. Today she is happy to be alive.

McLaughlin is typical for a charismatic girl her age. She has a boyfriend, a job as a director’s assistant at USC and a blog online called Cancer Ate My Foot.

“A lot of people don’t survive this cancer,” said McLaughlin. “I never would have been this healthy if they didn’t find it. This amputation has improved my quality of life.”

McLaughlin was diagnosed with synovial sarcoma of the foot, a rare form of cancer that manifested itself in the form of a tumor in the center of her foot. Survival is not common, and it left McLaughlin without a foot and destroyed a much-needed calf muscle used to empower her leg.

McLaughlin wears an artificial leg to walk around.

“The prosthetic goes up to (my) knee. I have a signs amputation which means it’s from the ankle. When it is amputated you lose all your calf strength.”

McLaughlin had her foot amputated above the ankle a week before her senior year of high school to stop the cancer from spreading. She said her foot was always in pain before the amputation. To this day, McLaughlin remains convinced that losing the foot improved her quality of life.

“It was amazing a year out of the surgery to know that I didn’t have the pain anymore,” said McLaughlin.

Sans a foot, McLaughlin became depressed and it looked like she would never be able to compete in sports again, but that didn’t stop her once she started to believe in her ability to overcome an obstacle that seemed impossible.

“It happened by chance,” said McLaughlin whose idea began as a simple desire and led to a quicksilver change in lifestyle. “When I graduated from college, I was determined to get healthy again. I started running and that led to swimming.”

Her life began to rapidly change after a decision to become “healthy again.” On New Years 2011, she made a pact with herself, focusing her mind to become competitive in sports once again.

With a grant from CAF, she was given the “running leg” and quickly rose in the ranks of triathletes.

It is now nine months since her personal resolution. McLaughlin will be on a plane to Beijing, China, to compete against other top paratriathletes in the ITU World Championship Race Sept. 9, 2011. The event will be a normal sprint distance triathlon, with a half-mile swim, 13-mile bike ride and a 5K run. McLaughlin will be in direct competition against triathletes from other countries competing in a professional sports circuit event.

McLaughlin qualified in August when she won the female TRI-5 division Accenture USA Paratriathlon National Championship in New York, N.Y. The TRI-5 division includes below knee amputees who are completing in all three disciplines of swim, bike and run.

“She’s got an incredible attitude,” said Bask. “To have her around is very inspiring for all of (the other triathletes). If she can do what she’s doing…”

Bask stopped his speculation there, hinting at the possibility of McLaughlin’s potential to one day be an Olympic athlete.

Until recently, McLaughlin wasn’t sure if she would be able to make it to China, but some recent donations have helped her fund a dream trip to the ITU World Championships.

A blog set up for her by CAF has helped raise money for travel expenses to be incurred on her trip from Los Angeles to Beijing to make her New Year’s goal to become a reality.

“I couldn’t believe how many people wanted me to get there,” said McLaughlin. “Within three days I had raised $3,000. I have a fundraising page (and) I have raised $4,000 (so far) from people that I never even met. I’m just some random girl…and I had three hundred hits for this little blog.”

McLaughlin will be part of a U.S. team of TRI-5’s that includes ten athletes.

The experience of losing a foot to cancer has taught McLaughlin to never give up and made her appreciate the life she has and she is doing the most with every second.

“Some things are just minimal details in the grand scheme of things.”

To follow McLaughlin’s blog, it can be read at canceratemyfoot.wordpress.com.