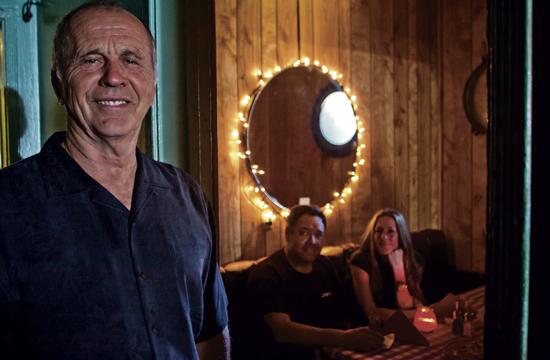 Chez Jay is a popular bar-restaurant on Santa Monica’s Ocean Avenue, which boasts an ample menu and a well-stocked cellar. But its most famous food story concerns a peanut in a shell, like the ones served in baskets at the bar. It’s a story that Mike Anderson, who owns Chez Jay and has helped manage the place for 32 years, loves to tell.

“Alan Shepard, the astronaut, [first man in space] would come in here. He actually took a Chez Jay peanut to the moon. We have a picture of Alan Shepard and Alice, Jay’s mom, holding the peanut that went to the moon.”

Subsequently he gave the peanut back to Chez Jay where it was frequently exhibited to visitors. However one day, Jay showed the moon-voyaging peanut to some visiting actors, including Steve McQueen, who “swallowed it–but he spit it out.” As a consequence, Jay won’t show the peanut to anyone. It is stored away in a safe place, but a certificate on the wall commemorates the fact that the peanut did make the journey into space.

Anderson came in to manage while Chez Jay was still being run by its founder Jay Fiondella who, with his mother Alice, opened Chez Jay in 1959. Having seen a lot of the legendary goings-on at the bar, Anderson enjoys recalling the origins of Chez Jay.

“Jay was a bartender at Sinbad’s on the Pier. This [location] was, I think, a coffee shop. The owner wanted to sell it so Jay got an investor to help finance the beginning of Chez Jay?

While Alice Fiondella ran the business, Jay was the one who, in Anderson’s words “promoted” the bar and brought in a varied and celebrated clientele.

“Jay was a hell of an entertainer and a hell of a host. When he started, a lot of the entertainers came in, especially a lot of the English entertainers–Vivien Leigh, Richard Harris, Richard Burton, all those guys. And so then the American entertainers asked them: where do you hang out? And they said Chez Jay’s restaurant. Because Jay had a policy—no cameras, no paparazzi, no autographs—so they had privacy.

“The Steve McQueens, the Lee Marvins, the Rat Pack all came here. I can go on and on; there’s a three-page list of all the entertainers who came in.

“A lot of producers came in so they would give Jay parts in movies. He was in ‘Sea Hunt,’ ‘Lethal Weapon’ I and II, ‘Short Cuts,’ small parts but they all liked him.”

The bar itself has been used as a movie location, notably in the recent Colin Firth film “A Single Man.”

The original menu for Chez Jay featured steaks, Lobster Thermidor, Beef Stroganoff, and other Continental dishes. Grenadine of Beef was $4.50 in 1959 and a New York Steak was $5.95. Prices today of course are higher but Anderson says that the prices are kept within range for the value.

“All our dressings, all our soups, we make from scratch,” said Anderson. “Our recipes, such as those for sand dabs and for curry, those are the recipes we’ve had for many years.”

Chef Miguel Rodriguez told The Mirror: “We maintain the tradition of Chez Jay but we’ve done a little bit of upgrading, of the Continental 70s-80s [menu]. We also concentrate on not only doing everything fresh but having healthy items.”

There are also salads, sandwiches, and lunch versions of some of the dinner entrees. Of the appetizers, which include steamed clams, seafood salad, and mushroom buttons, Rodriguez said “They’re not huge—they wouldn’t feed two people” but they might serve as a light meal for one. And there is also a breakfast menu which includes Huevos Rancheros; a Cobb Omelet with bacon, ham, chicken, tomato, onion, mushrooms, and cheese; Oatmeal Pancakes, and “Baked Banana French Toast.”

Petter Wichman, the bartender, noted that Bloody Marys and Mimosas are the favorite drinks at Sunday brunch. The Bloody Marys are made with a special homemade house mix. In the evening, martinis are the top drink, just regular martinis, not the designer ones. Old-style cocktails such as an old-fashioned made with Makers’ Mark, are often called for. There’s a selection of draft beer and some popular bottled brews.

“The crowd is an eclectic mix,” he added. “There you see a fellow who’s been coming here since the beginning days and he’s sitting next to a young lady.”

And Mike Anderson adds that Chez Jay also has “one of the greatest juke boxes in town.”

So there you have it–atmosphere, celebrity sightings (if you don’t make a fuss about them), great food for price value, great drinks, music, and peanuts galore.

Anderson noted: “When people said to me: ‘Alice is gone; Jay’s gone (he passed away a few years ago) what is your M.O.?’ And I say my M.O. is ‘Steady as she goes.’ I keep moving forward. I have a contact with it because I’ve been here 32 years.”