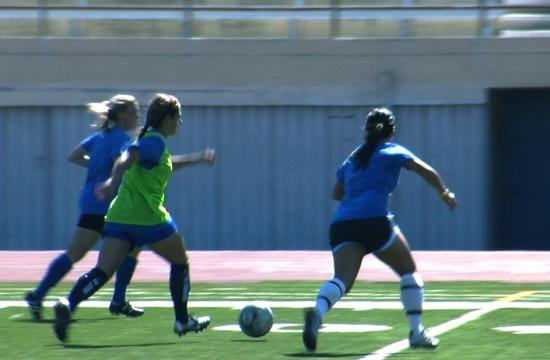 After going 12-2-5 in the 2010 regular season, the SMC Lady Corsairs soccer team met El Camino in the first round of Southern Section Regional Playoffs.

The Corsairs dominated every facet of the game but couldn’t find a way to score. Three different kicks hit the goal post.

Then, late in the second half with less than 15 minutes in regulation, El Camino scored what would be the winning goal to end SMC’s season prematurely.

This year’s Corsairs will not forgive or forget that day, which makes them hungry and dangerous.

“We had a chance at winning it all,” said sophomore forward Olivia Patterson, “but we got upset. I think we kind of took our opponent too lightly and took (ourselves) for granted. We got a little too confident at the end.

“Losing like that, I think, motivated us more this year to come back and really put in the extra work.”

Benditson said the 2011 team has a sophomore goalie, sophomores who can score and freshmen who can contribute.

The first goal is try to claim the elusive Western State Conference title. Los Angeles Pierce College has taken the conference the past six years and eight of the last 10. The Corsairs have been fortunate to still make the playoffs seven of the last eight seasons despite losing the conference to the Lady Brahmas.

“We seem to be the continual bridesmaids, I like to call it,” Benditson said. “We seem to get second fiddle to Pierce College every season, but we’re definitely right there, nose-and-nose. It always seems to be a two- or three-horse race, and hopefully this year, we’re going to be able to catch them.”

Bendiston did say even if they don’t win the conference, they can still have success.

“Obviously, we want to win, but I think we want to make the experience something special for all these kids and for the program and for the school,” he said.

“(To win), you’ve got to have the horses and I truly believe that we have that this year. We have a nice core group of girls of players coming in and returning, and we’re hoping to make some noise.”

The Corsairs will host Riverside to start the season today (Friday) at 6 p.m. at Corsair Field.