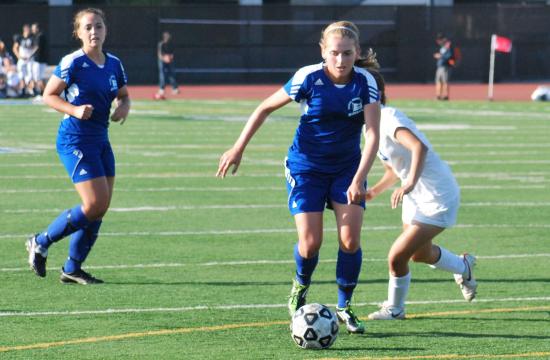 The Lady Corsairs (1-6) certainly picked a good game to explode on offense. After six-and-a-half preseason matches where Santa Monica College’s women’s soccer team never once held a lead, the Lady Corsairs ended the exhibition portion of the 2011 season with four second half goals to get a 4-1 win over Santa Maria’s Allan Hancock College (3-2-1) on Tuesday.

Every player had an opportunity to take the field for SMC, who prepares to take on conference rival Bakersfield College in its season-opener at home on Sept. 30.

“Stress-relieving,” Corsairs head coach Aaron Benditson said of his team’s four goals in one half performance. “We were finally relaxed. We were able to enjoy the opportunities that we were creating and we just executed.”

After a scoreless first half, the Lady Corsairs’ midfielder Desire Kober kick found the back of the net while positioned inside the box on a corner kick pass from defender Sam Li in the 55th minute to give SMC a 1-0 lead.

Then forward Meg Pierce extended the SMC lead to 2-0 about two minutes later when she scored on a breakaway goal off the inbound throw.

The Lady Bulldogs would cut the SMC lead in half at the 70th minute, when Heather Soden snuck a shot on goal just past goalkeeper Katherine Alvarenga on a corner kick.

However, the SMC defense stifled Allan Hancock’s offensive rhythm for almost the entire second half, as the Lady Bulldogs did not have another legitimate scoring opportunity in the final 45 minutes.

It also helped that the Lady Corsairs were in an offensive rhythm of their own, keeping the ball in Bulldog territory the majority of the second half and taking advantage of as many scoring opportunities as possible. The Corsairs scored their final two goals in the final 11 minutes.

“It was really a perfect time. It was a great experience for our girls, to have every one of them in the game, just have that feel-good factor,” Benditson said.