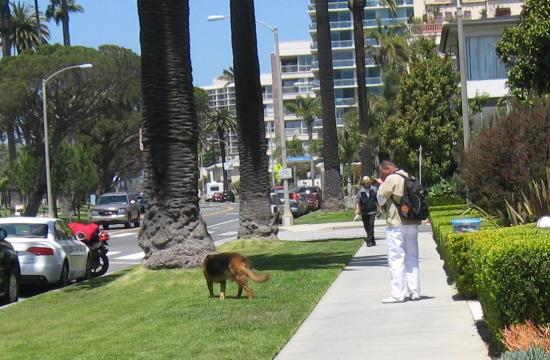 One Santa Monica resident says she would like to see a special three-digit hotline number created (like 911) where residents can call the police when minor laws are being broken.

Harriet Epstein says she regularly walks around the neighborhoods of Santa Monica, and says it doesn’t take long before she sees many city and state laws broken, which are designed to provide a safe environment.

“Since police can’t be everywhere and see everything, the department could enlist residents for extra eyes,” Epstein said. “Almost everyone travels around the city with a cell phone.”

Epstein snapped the accompanying photos of minor laws being broken.

“These pictures were taken in a short two-week period in May showing wrongdoers,” she said. “It seems that people know they can get away with anti-social behavior in Santa Monica without consequences.”

A common minor law Epstein says she’s seen broken all too often is dogs being walked on the sands of the beach despite signs everywhere saying “no dogs on or off leash.”

“I think Santa Monica should be a community where people respect the rights of one another,” Epstein said. “The breakdown in civil behavior is troublesome. If everyone does only things that he wants regardless of how it affects others, chaos results.”

What are your thoughts on the issue? Email opinion@smmirror.com.