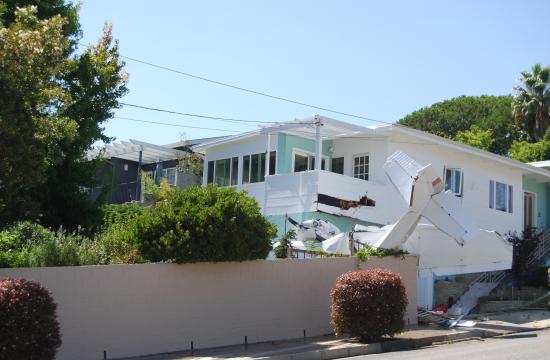 The student pilot of the single-engine Cessna 172 that crashed four minutes after taking off at Santa Monica Airport on Monday was alert and responsive enough after surgery to answer questions from federal investigators on Tuesday.

Wayne Pollack, a National Transportation Safety Board senior investigator, told The Mirror a preliminary report would be released late next week, but the final report determining the cause may take until next year to complete.

The pilot, whose name and age has not been released, was pulled from the wreck by two workers who were painting the single-story home he crashed into. The pilot was rushed to hospital with a suspected broken leg and underwent surgery Monday night.

One of the painters was decontaminated at the scene by firefighters after he was exposed to aviation fuel; the other painter was taken to hospital for injuries caused from flying debris.

Pollack, who is being assisted by Federal Aviation Administration investigators, said he could not comment on the pilot’s surgery, but said he was “alert and responsive” and was able to answer questions from investigators in hospital on Tuesday.

“He had just come out of surgery,” Pollack told The Mirror. “He appeared to be doing very well in order to be able to speak with us. As far as the conversation goes, we reviewed the standard things that we review with all pilots that have an accident. We look into and ask questions about their flight training, background, currency, purpose of the flight, the training he had received from his flight instructor.”

Pollack said it was a requirement for student pilots to fly solo as part of their training.

On Wednesday, Pollack said the aircraft wreck was examined at an undisclosed “privately owned facility in Southern California.” He said the plane’s airframe, flight control surfaces and engine were examined.

On Tuesday, maintenance records of the aircraft were examined, but will continue to be analyzed, Pollack said.

“We’ve made a preliminary review of the records, and the operator of the aircraft has been fully supportive and is totally cooperating with the NTSB with respect to the production of the documents that we’ve asked for,” he said.

Pollack said all air traffic controllers working in the tower at Santa Monica Airport at the time of the incident would soon be interviewed. He said he had analyzed the voice recordings between the control tower personnel and the pilot.

“Those communications revealed that the pilot was in an emergency condition in that he requested to stay in the traffic pattern and land the airplane,” Pollack said. “The air traffic controllers did clear the aircraft to land. During that landing attempt, the aircraft was not successful in landing in the normal area of the runway. The FAA controllers issued a go-around instruction to the pilot. The pilot told us he was attempting to adhere to that air traffic control direction when the aircraft impacted the ground.”

Residents have complained for years about the potential for a jet to overshoot the runway and crash into homes. The nearest homes are within 300 feet of the runway’s end.

“The accident occurred, it’s very unfortunate, and thank god that the pilot lived and no-one on the ground was injured,” Trimborn said. “We are a public use facility just like a street or a highway, and accidents occur in any transportation system. Accidents do occur, and there is no transportation system from walking to space shuttles that’s immune to it.”

Prior to Monday’s accident, a Santa Monica City Council special meeting had already been scheduled for Oct. 4 to discuss the future of Santa Monica Airport.

The current 20-year agreement between the Federal Aviation Administration and the Santa Monica City Council expires on June 30, 2015.

“It will be the City Council’s decision in 2015 or prior to that to what they want to do with the airport,” Trimborn said. “And that’s why we’ve started this visioning process to help them with that decision.”