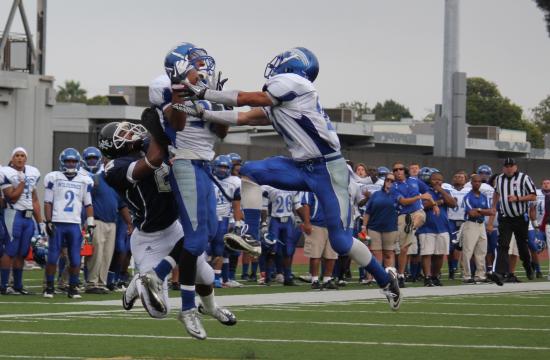 San Bernardino Valley College quarterback Ethan Hillyer had just broken free up the middle for 32 yards and the go-ahead score for the Wolverines with 2:02 to play.

A failed two-point conversion after Hillyer’s score gave the Santa Monica College one last chance to complete a second-half comeback.

With time ticking, SMC quarterback Alfonso Medina led the Corsairs in the right direction by going to the air, connecting with wide receivers Bilal Muhammad and Kris Comass and pushing all the way to the Wolverine 18-yard line.

“Then the wheels came off,” said SMC Coach Gifford Lindheim.

An illegal procedure penalty pushed the Corsairs back to the 23 and a second offensive pass interference penalty pushed them back 15 yards to the 37. Alonzo Frederick gained five yards that was quickly taken away by two sacks driving SMC 18 yards backwards.

On fourth and 42, Medina forced a Hail Mary pass downfield in double coverage leading to an interception by Jamaal Anderson to seal the victory for San Bernardino 40-35.

“I felt more comfortable today,” said Santa Monica quarterback Alfonso Medina who was 25-for-33 for 299 yards and had four touchdowns and two interceptions in the losing effort.

The Corsairs had led the football game minutes before 35-34 after scoring three unanswered touchdowns in the second half.

The Corsairs had also dominated the first quarter with Medina connecting for two long touchdowns to Comass.

But SMC came back to score 21 unanswered of their own before the final two drives.

Comass finished the night with six receptions for 152 yards and three touchdowns while defensive back Brian Hawthorne had eight unassisted tackles.

“I don’t know if I have the magic answer to why we were up and down today,” said Lindheim. “If I did, I would fix it. The bottom line is we didn’t win the game so I’m not happy with the end result. Defensively, we got to continue to improve.”

Santa Monica College has a bye next week and will be preparing for their next football game against Santa Barbara at Santa Barbara on Oct. 8 at 6 p.m.